Finance Minister Nirmala Sitharaman has described her upcoming budget as unlike anything seen in the last 100 years.

When she presents it on February 1, Ms Sitharaman will not only aim to repair battered government finances and ensure demand recovers in an economy facing its worst contraction since 1952, she must also revive declining revenue and restore millions of jobs lost during the pandemic. That will be crucial to boosting consumer sentiment in a country where local demand contributes nearly 60% of gross domestic product. 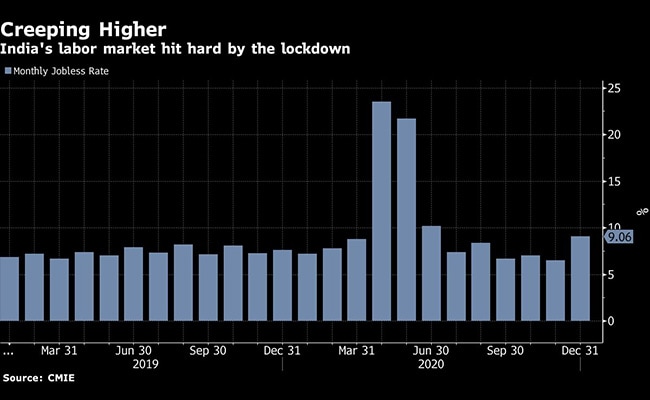 “The virus has led to a demand shock and the budget might need to focus on that,” said Bank of America economist Indranil Sen Gupta, pointing to in-house surveys that showed 19% of respondents were laid off during the pandemic. Demand has to be created either through cutting taxes on fuels or providing income support and spending on infrastructure projects, he said.

Prime Minister Narendra Modi’s government has been parsimonious in pump-priming the economy, for fear of a rating downgrade to junk, and may find that kicking the can down the road is no longer an option. With the central bank halting monetary easing since mid-2020, citing high inflation, the onus is on Ms Sitharaman to loosen the budget despite having meager resources to work with.

The fiscal cost of steps announced so far account for less than 2% of GDP, and compares to direct spending of roughly 3% on average in other emerging markets, according to S&P Global Ratings.

Analysts believe that tax cuts, higher capital expenditure and greater spending on infrastructure projects — which tend to support low-income earners — hold the key to unlocking demand for goods and services. 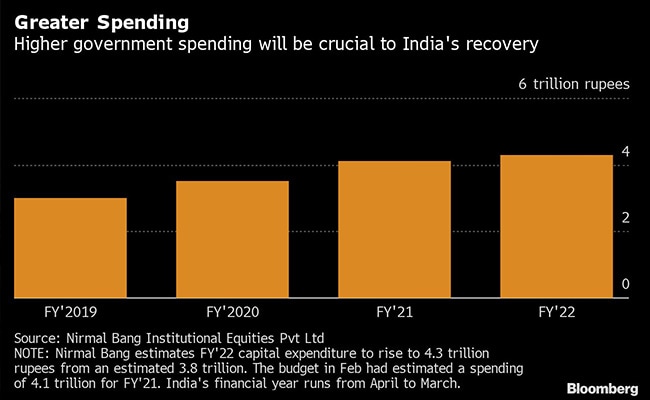 In December, 38.7 million Indians were unemployed, latest data from private think-tank Centre for Monitoring Indian Economy Pvt. showed. Purchasing managers’ surveys separately pointed to job losses in both the services and manufacturing sectors — which together make up more than 65% of the economy. That’s pushed the jobless rate higher to 9.1% in December, the highest since June, according to CMIE, as the pandemic continued to play havoc on the economy.

Those numbers lay bare the absence of private capital spending and highlight the need for government expenditure to lead a recovery in investments and ensure that the rebound is more durable.

“Public spending-led job creation is sine-qua-non for the recovery,” said Kunal Kundu, an economist with Societe Generale GSC Pvt. in Bengaluru. It’s time for the government to “improve the quality of its expenditure with a major focus on infrastructure spending, which has high employment elasticity.”

“We expect recovery momentum to continue and likely get a major lift from additional stimulus in the upcoming budget announcement on Feb. 1. The government’s vaccination drive should also boost consumer and business sentiment,” Abhishek Gupta, India economist said

Spending more will be a key challenge for the administration, which had a roadmap for narrowing fiscal deficit to 3% of GDP before the pandemic hit. Economists surveyed by Bloomberg see stimulus steps, along with falling tax revenue, pushing India’s budget gap wider to about 8% of GDP in the current financial year ending March, more the double a 3.5% target.

But a pick up in tax collections in the October-December quarter offers hope. Improved revenue, as well as income from asset sales, should help the government rein in its deficit in the next fiscal year. That, in turn, will open the room for more capital and welfare spending, supporting greater economic activity and drawing millions of migrant laborers who fled to their rural homes during the lockdown.

“Some laborers may find their urban jobs do not exist anymore, and may require social welfare benefits for longer,” said Pranjul Bhandari, chief India economist at HSBC Holdings Plc in Mumbai.. “In the short run, the accumulated savings of high earners can support GDP growth. But once that wears off, the lack of demand can potentially lower medium-term growth. As such, the continuation of social welfare spending will become important.”

Best and safe steroids for bodybuilding, trenbolone acetate vs ethanate