Ole Gunnar Solskjaer admits Dean Henderson is “not the most patient guy” as Manchester United’s back-up goalkeeper continues to try and prove he is worthy of a bigger role at Old Trafford.

Having spent loans spells at Stockport, Grimsby, Shrewsbury and Sheffield United, the 23-year-old has supplanted Sergio Romero as back-up to David De Gea after impressing during two seasons with the Blades.

Henderson was rewarded with a new and improved contract upon returning to United in the summer, tying the academy graduate down until at least 2025.

The Cumbrian has since made 10 first-team appearances for United and last month admitted that “being sat on the bench is not something I want to do all the time, so that’s been the hardest bit”.

Henderson looks set to make another appearance in Tuesday’s FA Cup fifth-round clash with West Ham, when he can stake his claim days after De Gea’s disappointing display in the 3-3 Premier League draw with Everton.

“Dean has done very well when he’s got the chance and he’s matured,” United manager Solskjaer said. “For me, he’s developed his game.

“I know he’s not played as many games as he would’ve done last season, but you see every game when he plays and in training his improvement, working hard on a couple of aspects that we’ve spoke about with him.

“I’ve been impressed with his attitude and workrate. Of course he’s, how to say… he’s not the most patient guy.

“He wants to play every game because he knows that he’ll perform well, so long may it continue because he’s improved since he’s come here.”

Henderson started in the previous rounds against Watford and Liverpool, with Mason Greenwood ending a seven-week goalless streak in the latter fixture.

The 19-year-old striker has not scored in his four appearances since then but has impressed for United, looking particularly sharp in the ultimately frustrating draw with Everton.

“Mason was different class,” Solskjaer said. “I thought he was the standout performer on the pitch, he just didn’t get a goal that his performance deserves.

“He’s working with some of the top forwards in the country, of course. He’s learning off them and it’s exciting to see that he’s come over his blip and he’s playing really, really well.”

Greenwood may feature again when West Ham visit on Tuesday, but Paul Pogba and Eric Bailly are doubts as Solskjaer looks to keep this avenue towards a first trophy as United boss alive.

The Norwegian says the Ivorian is more likely of the pair to feature than Pogba, who limped off on Saturday with a thigh issue, while David Moyes’ improving visitors will be unable to call upon Jesse Lingard.

The 28-year-old’s appearance for the Red Devils in the third-round tie against Watford was only his third of the season, leading to his loan move to the Hammers for the remainder of the season.

Lingard has not taken long to make an impact with the east Londoners, grabbing a brace on his debut at Aston Villa last week.

“They’ve improved a lot, I have to say,” Solskjaer said of the Hammers. “David’s got his team really well organised, as he always does with his team.

“He’s got some very good players and of course Jesse did really well for them and I hope he’s going to make them a better team because that means he’ll have played well.

“Jesse has started really well. He’s come down there, made a good first impression.

“He’s just got to knuckle down, work hard, keep his head down, keep improving his game.

“We know how good he is, just get a regular run in the team and then hopefully we can see the best of Jesse.” 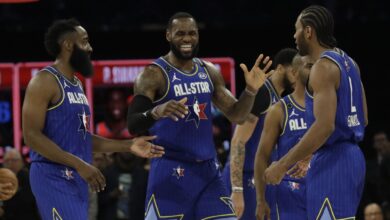 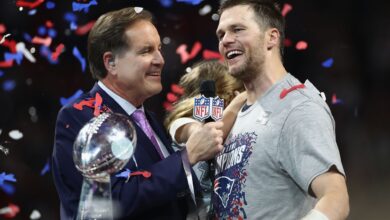 ESPN wants to lure Jim Nantz away from CBS