nushka Gupta and Stephen Chen are excited for the fall semester. But they aren’t sure how it’ll go.

Gupta, a first-year student at New York University, is worried about adjusting to college coursework and putting her rusty social skills to use. “It’s been so long since I’ve been around so many people,” she said.

Sometimes she wishes she could have gone to college a few years ago, so she didn’t have to think about only going to Covid-safe places or hanging out with Covid-safe friends.

Chen, a senior at the Savannah College of Art and Design, experienced pre-pandemic college and strongly prefers it that way. Last academic year he was largely confined to Zoom classes. He’s noticing a pattern during the pandemic era: He starts each term well, he said, “but then fatigue and burnout sets in pretty early — earlier than usual.”

Data have made clear that students are experiencing heightened stress — particularly academic stress — and burnout as the pandemic continues. With the Delta variant thwarting colleges’ plans for a near-normal campus experience this fall, those stressors could compound student mental-health concerns that have been on the rise for years.

But so far, the pandemic hasn’t caused a deluge of new psychological diagnoses among students. The emerging picture of Covid-19’s effect on student well-being is more complex.

The spring Healthy Minds Study, which surveys tens of thousands of students each semester about their mental well-being, found that 41 percent of students screened positive for depression and that 34 percent screened positive for anxiety. Those are the highest levels since Healthy Minds began collecting data in 2007. But those numbers have been steadily rising for years.

“We don’t see a massive spike that’s happened during the pandemic, but a continuation of a very troubling trend,” said Sarah Ketchen Lipson, a principal investigator of the study and an assistant professor in the department of health law policy and management at Boston University’s School of Public Health.

Meanwhile, the Center for Collegiate Mental Health, which tracks students who seek mental-health treatment on campuses nationwide, found a mix of outcomes. In the fall of 2020, the latest period for which data are available, the center found that the prevalence of anxiety and depression among students who sought treatment was similar to that of a year earlier, before the pandemic began.

Some specific symptoms of anxiety and depression — like trouble sleeping and loneliness — increased in 2020, according to the center’s data. Other symptoms, like having a panic attack in public, decreased.

Student mental health isn’t a monolith, said Ben Locke, senior director of counseling and psychological services at Pennsylvania State University and founder of the center. Some students lost several family members to the virus and are seriously struggling. Other students were bored at home and are now thrilled to be back on campus with their friends.

Most students did not seek counseling for a pandemic-related reason, the center found. But about two-thirds of students reported that Covid-19 had affected their mental health.

Locke suggested an explanation for that discrepancy: Students appeared to be using the term “mental health” to describe general distress. Elevated mental-health concerns, he said, don’t necessarily mean diagnoses that require clinical treatment. Those students might need other forms of support — like more flexibility in the classroom.

mong students who went to campus counseling centers, the one concern that was significantly heightened in the fall of 2020, compared with a year earlier, was academic distress, according to the Center for Collegiate Mental Health. Most often, students reported a lack of motivation, trouble concentrating in classes, and an inability to complete work.

Similarly, in the spring 2021 Healthy Minds Study — which surveys the overall student population — 27 percent of students reported that “emotional and mental difficulties” had affected their academic performance on six or more days in the previous month, up from 22 percent in the spring of 2020.

This semester, many students will be returning to classrooms after 18 months of nontraditional coursework and test-taking, Locke pointed out. “They’re going to land on campus really out of practice with what would be typical academic standards and expectations,” he said.

It is so hard to keep the motivation going when there’s so much uncertainty.

Indiana University’s Beginning College Survey of Student Engagement surveyed 35,000 incoming freshmen across the country and found that more than half of them said the pandemic had substantially increased their mental and emotional exhaustion. That problem, the survey said, “appears to be linked to expectations of academic difficulty” — how hard students think it will be to learn course material, manage time, get academic help, and interact with professors.

On top of that, many students are coming into the academic year already burned out. Ohio State University polled 1,000 of its students and found that 71 percent of them had screened positive for burnout in April 2021, compared with 40 percent in August 2020.

And the typical summer reset was disrupted by evolving pandemic dynamics, said Stacia’ Alexander, director of the mental-health clinic at Paul Quinn College, a historically Black institution in Dallas.

“It is so hard to keep the motivation going when there’s so much uncertainty,” Alexander said. Many of her students are first generation, with jobs and responsibilities at home, and are wondering whether they’ll be able to afford college while also supporting their families. Now, amid the fourth Covid-19 wave, they also have to think about mask policies and how classes will work. “It’s, like, exhausting just to get to college,” she said.

Seli Fakorzi, mental-health director for TimelyMD, a teletherapy company that works with dozens of colleges, has a daughter who had planned on moving to campus for the first time. “She had bags packed,” Fakorzi said, and now, “she might not be going.”

he question is whether those stressors will translate into overwhelmed counseling centers. Last year, demand for therapy was down at most campuses, a drop that counseling directors attribute largely to decreased enrollment and the rise in hybrid or virtual learning.

Many remote students found therapists in their local communities, according to counseling directors. But some mental-health advocates have expressed concern that students lost access to treatment they needed because they lacked privacy or a good internet connection at home.

Among the students who did seek treatment on campus last academic year, many counseling centers reported seeing upticks in certain anxiety and depression symptoms.

Asia Wong, director of counseling and health services at Loyola University New Orleans, said she saw an increase in “baseline present-tense anxiety.” Typically, anxiety is past-based, like worrying about having made a mistake, or future-based, like worrying about dying, Wong said. But present-tense anxiety rose during the pandemic, when simply being in the grocery store could prompt fear about getting sick.

So students who would normally have low baseline levels of anxiety — say, a two out of 10 — were at a five out of 10, she said. When college got stressful, their distress could escalate more quickly.

Some students, Wong said, have shown symptoms of post-traumatic stress disorder, including hypervigilance, nightmares, and intrusive thoughts, like: People over there are laughing and not wearing masks; that’s not OK. The symptoms look less like the trauma from a single event, like a sexual assault, Wong said, and more like the trauma from constant stress over time that military veterans tend to have.

As the fall semester gets underway, Wong said she’s seeing two different dynamics play out on her campus.

Returning students, she said, are weary and wary. They’ve experienced sudden campus shutdowns and rapid changes. They want to do the right thing and follow public-health rules, but they’re not sure they can get through another year of Zoom classes and social distancing. Louisiana has one of the highest Covid-19 case rates in the country, and a switch to virtual learning feels like a real possibility.

First-year students, meanwhile, are largely excited to be there and optimistic about how the semester will go, Wong said. Some of their friends who are just a year older didn’t come to campus at all.

Alexander has seen one positive sign at Paul Quinn College: Students seem more open about their mental-health concerns because they know everyone’s struggling with the same reality. “What the pandemic has taught the students is that ‘I don’t have to hide how I’m feeling,’” she said.

his academic year, Locke said, colleges might see a significant increase in the number of students seeking mental-health treatment now that many campuses are fully open. Prior to the pandemic, demand for therapy had gone up every year.

Some counseling centers are staffing up to prepare for the possibility. At Loyola New Orleans, Wong said she has added a full-time counselor and changed a part-time position to full time. Her office now has seven counselors and four graduate-student interns, for a university with about 4,500 students.

Another challenge for counseling centers will be that mask mandates have returned on many campuses. “We found it to be, unsurprisingly, not great doing therapy in masks,” Wong said. Currently, her center is bringing students in for teletherapy sessions from different rooms, so students are sitting just a wall away from their counselor.

Some potential mental-health effects — like whether students will have social anxiety as they return to full campuses for the first time in more than a year — remain to be seen. Over the summer, Loyola New Orleans started offering a Covid-19 social anxiety and re-entry support group that will continue this semester.

Faculty right now have an important role to support and acknowledge what students are going through.

But counseling centers aren’t the only solution. Colleges should offer students a range of support options depending on what they’re struggling with, Locke said. “If we route every person who’s distressed into mental-health services,” Locke said, “we’re just going to flood those services at such a level that they won’t be able to support the students who need it.”

That support might mean a quick text or phone chat with an on-demand counselor after hours, said Fakorzi, of TimelyMD, or help with basic needs, like food or housing.

In many cases, students might just need extra academic help — and, perhaps, a little leeway in the classroom. “Faculty right now have an important role to support and acknowledge what students are going through, and think about how class structures can be most conducive to mental health,” Lipson said. That doesn’t mean reducing rigor.

Chen, the Savannah College of Art and Design senior, said he’d like to see a normalization of academic mental-health breaks — whether it’s a full mental-health day or just a 20-minute breather. “Some days, my motivation for school just isn’t all there,” said Chen, who leads his college’s chapter of Active Minds, a mental-health advocacy organization.

Gupta, who co-founded her high school’s Active Minds chapter, is listening to podcasts and practicing meditation to cope with stress. She’s grateful to have an in-person college experience at NYU, even if it’s mostly in a mask. Her sister, who started at NYU last fall, had to take her freshman-year classes online.

“A lot of students expect things to go back to normal, and we’re all hoping for that,” Gupta said. But “we all have to be mindful of the fact that it’s going to take time, and that’s OK, too.”

Unvaccinated individuals are 29 times more likely to be hospitalized from COVID-19, CDC says

The Very Best Things to do in Lodz, Poland 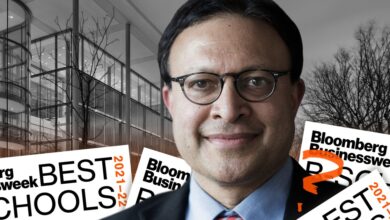 A Dean Tried to Replicate a Popular College Ranking. He Couldn’t. 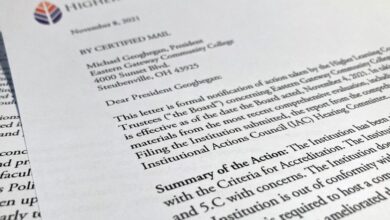 A College Found Explosive Growth Through Its Online Programs. Now Its Accreditor Has Put It on Probation. 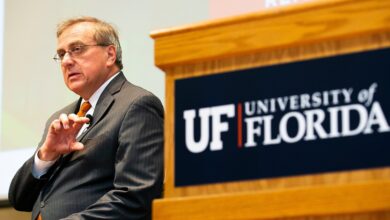 U. of Florida’s Accreditor Will Investigate Denial of Professors’ Voting-Rights Testimony 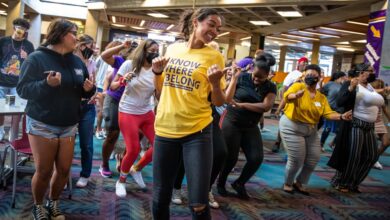 Is Campus Life Back to Normal?