I’ve mentioned several times that I rearranged the furniture in the living room (which I will show you very soon!). Now that the back of the sofa creates a more defined entryway, that means that any time I sit on the sofa (my favorite place to sit in the living room), my back is to the front door. There was just something very unsettling to me about having my back to a full glass front door, especially when sitting on the sofa at night.

So I decided to frost the front door and incorporate our house number. Here’s how it turned out…

I used my Silhouette to cut the house numbers out of Gila privacy frosted film, which made it incredibly easy and accurate. If you don’t have a Silhouette or Cricut, you can cut the numbers by hand. It would be a tedious job, but as long as you use a brand new blade in an X-acto knife, and take your time to get the numbers precise, it’s doable.

But I took the easy way. I made a rectangle about 11.75 inches wide and 6 inches high, and then filled it with large numbers using the Arial Black font with the size at about 330pt. I also had to remember that when placing the film on the cutting mat, the side of the film with the clear plastic (i.e., the plastic that gets removed and discarded to reveal the sticky side of the frosted film) faces up.

The cutting mat of the Silhouette is sticky so that it holds the paper (or whatever is being cut) firmly in place during the cutting process. So removing the frosted film from the sticky cutting mat was a bit tedious and took quite a bit of patience because the film can tear easily if you’re not careful with it. But I managed to get it loose without any tears and set it aside while I worked on the door.

I cut a piece of film the approximate width of the glass, and then used a very generous amount of the application solution, sprayed directly on to door, to place the film where I wanted it. Once I had the backing peeled off and the film in place, I used the squeegee that comes with the application solution to remove the excess liquid from underneath the film.

This took me two tries. The first time I did it, I had five pieces of dog hair, as well as a few other random pieces of lint and dirt stuck between the film and the glass. I tried to convince myself to live with it, but I just couldn’t. When I decided to remove it and start over, the film had been on there over an hour and had dried and stuck very well, so when I removed it, all of the adhesive stuck to the glass.

So I had to head to the automotive store and pick up the Gila adhesive remover (auto stores carry it because it’s used to remove tinted film from car windows) to thoroughly clean all of the adhesive residue from the glass and start again.

That stuff works like a charm. If you have to remove this film from glass, and have adhesive residue left over, any other way of trying to remove that film (including Goo Gone) will frustrate the heck out of you. I know this from experience. 😀 It’s just not worth the hassle to try other remedies when this stuff works so well.

So after getting all of the residue removed from my first attempt, and cleaning the glass way more thoroughly than I did the first time, my second attempt went amazingly well. There’s not a single piece of dog fur or other particles trapped under that film anywhere.

With the film on the entire glass, I then used a piece of scrap trim (about an inch wide) as a guide to trim a border around the glass. I did this using the trimming tool that comes with the application spray and squeegee.

And once that was cut all the way around and removed, it looked like this…

Just a word of caution, after you apply the frosted film, you have about 45 minutes to an hour during which it will peel off quite easily. Once you get past that time, and it starts to really dry onto the glass, it’s impossible to remove without leaving that sticky residue behind. So if you’re going to trim a border or add numbers, do it all at once. Don’t wait and do this project in phases over two or more days.

Next, I moved on to the house numbers. I measured the rectangle that I had cut on my Silhoutte (which was 11.75″ x 6″), and added 1.5 inches to both the height and width to give me the size of the rectangle I needed to cut out of the film on the window. I measured very carefully for placement so that it would be equidistant from the sides and the top, and then used my same straight edge (i.e., the piece of scrap trim), and an X-acto knife with a brand new blade in it to cut away the rectangle where the house number would go.

Most of that came off easily, but there were a few areas where sticky residue was left behind.

Separating the house numbers window film from the protective plastic was probably the most tedious part of this whole project. It would have helped to have an extra set of hands to hold the peeled film away from the plastic or any other surface, but I managed on my own. I didn’t rush it because it would have been very easy to either tear the film, or to get it stuck to itself. And if that happens, it’s game over. There’s no other option but to cut another house number. Once you get the film stuck to itself, there’s no saving it.

So it took a great deal of patience, but I managed. And then I sprayed the application spray onto the house numbers film rather than onto the glass, and positioned the numbers. Before doing any squeegeeing, I stepped back to view the numbers and make sure the placement was just right.

And finally, I placed the two center pieces on the zeroes, and it was done.

If you’re wondering why the inside border of the door next to the glass is white, it’s because that application spray literally took the paint off of those areas. I have no idea why it affected that area, but didn’t affect any other areas on the door where the spray was running down. But the paint on that inside area peeled off almost in one solid piece. It’s a perfect white border, so I’m not sure if I’ll even bother repainting it.

Anyway, here’s how it looked when I was finished.

And here’s the view this morning…

It definitely shows up better at night (obviously), but it will also show up better if I take pictures in the afternoon rather than the morning when the sunlight streams through the front door and windows.

Here’s the early morning view from the outside…

I love how it turned out. And now I won’t feel so exposed and vulnerable when I’m sitting on my sofa with my back to the front door at night.

The Beginners Guide: 9 Essential Items to Bring on Your Hiking Trip 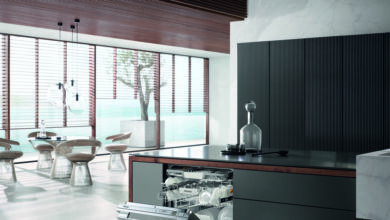 6 Things to Consider When Designing Your First Kitchen 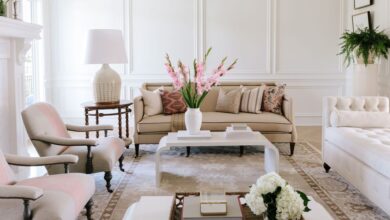 How to Clean Your Phone 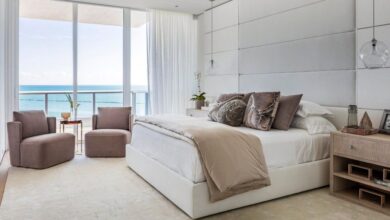