It’s officially that time of year again — it’s the holiday season! Every November and December, folks get into the yuletide spirit with many different traditions. Whether it be cooking a delicious Christmas dinner, finding creative Christmas tree décor or even scrambling online to get the most popular gifts to impress your loved ones, there’s plenty to bring about the true meaning of the holidays.

Luckily, the Hallmark Channel and Hallmark Movies & Mysteries have a similar way of honoring this time of year, because the channels are back with 40 new Christmas movies to enjoy. Beginning in October, the network kicks off their Friday, Saturday and Sunday nights with Hallmark Channel’s “Countdown to Christmas” at 8 p.m. ET and Hallmark Movies & Mysteries’ “Miracles of Christmas” at 10 p.m. ET/PT on Saturday nights. Talk about the perfect way to evoke feelings of joy while also enjoying the sweetness that comes from Hallmark’s romances!

This year’s lineup is jam-packed with familiar faces dedicated viewers know well, like actresses Lacey Chabert, Jodie Sweetin and Tamera Mowry-Housley. No matter who is starring in it, the movies are sure to bring up feelings of excitement as we head into the holiday season. So sit back, grab a hot cup of cocoa and take a look at the Hallmark 2022 Christmas movie schedule below.

When a single mom and a neighbor say harsh words to one another, she is insistent that he is trying to ruin the holidays. But his grouch-like approach may just win her heart come Christmas.

We Wish You a Married Christmas, starring Marisol Nichols and Kristoffer Polaha

As a married couple, Becca (Marisol Nichols) and Bobby (Kristoffer Polaha) are having trouble reconnecting with one another. They decide to head to a Vermont inn right before Christmas to recharge and rebuild their marriage.

Sara (Sarah Ramos) is a children’s book author who comes home and finds herself getting closer with loved ones. What’s more, her teenage crush Travis (Carlo Marks) is also part of the mix.

Real estate executive Erica (Jodie Sweetin) must go to Alaska to try and buy a bed and breakfast. When she discovers the property is owned by her ex, she finds herself possibly falling in love with the town and maybe with him as well.

David (Will Kemp) is an American architect who’s moved to London for a prestigious work opportunity. When he bumps into professional shopper Anji (Reshma Shetty) while trying to pick out a present for his girlfriend, he hires her to help him find the best holiday gift.

Katherine is the Ghost of Christmas Present who is sent to help one soul, Peter, relearn the magic of Christmas spirit.

When Summer’s mother Vivian moves in with her and her young daughter, she brings with her a mini Christmas village that looks like their town and supposedly grants holiday wishes.

Kerry (Kimberley Sustad) is a local shop owner who becomes the costume designer for a rom-com filming in her local town. As she works on the movie, she rediscovers her love for fashion while falling for leading man Brad (John Brotherton).

Lisette (Ledisi) is an R&B singer who accidentally has a photo of her and her music producer ex (Roger Cross) go viral at an engagement announcement. This leads to her family insisting he join her on the trip back home to New Orleans for Christmas.

When pop star Darcy (Patti Murin) comes to home to spend the holidays with her sister and niece, she unexpectedly starts to coach the high school choir with her one-time enemy, Adam (Brendan Penny).

Claire (Rachel Skarsten) is an MI5 agent who gets assigned to go undercover as a royal nanny. While trying to adjust to the mission, she finds herself trying to resist the charms of Prince Colin (Dan Jeannotte) as well.

When two siblings learn their parents plan to shut down the Chinese restaurant they’ve operated for decades, they re-evaluate their futures along with that of employees.

Shelby (Tamera Mowry-Housley) really wants to quit her job as a rocket engineer. But when her daughter becomes convinced that her boss Evan (Ronnie Rowe Jr.) is a Christmas prince from a story Shelby made up years before, she starts to second-guess her plans.

Three brothers with family problems get the biggest surprise for the holiday season: They are forced to work together in order to take care of a baby.

When I Think of Christmas, starring Shenae Grimes-Beech, Niall Matter and Beth Broderick

When Sara (Shenae Grimes-Beech) returns home to help her mother move, she doesn’t expect to see her ex-boyfriend Josh (Niall Matter) there. While the two have a complicated history, they slowly get close and try to heal old wounds.

Campbell is finally getting to know her father for the first time — except he doesn’t realize she’s his daughter. She’s been hiding under the cover of being a journalist, wanting to learn more about her family and all of the messy, wonderful things they do together.

When Jen (Clare Bowen) decides she wants to enter a brand’s design contest, she gets her best friend Max (Brant Daugherty) and her baby nephew to help her pose as a family influencer.

When Crown Prince Edmond (Jordan Renzo) comes home for Christmas in the hopes of becoming king, he gifts his mother with a Corgi who needs serious training. He decides to turn to American-born Cecily (Hunter King) for help, who makes sure he’s involved with the sessions.

In this movie, Emma (Kat Barrell) experiences two very different Christmases. One path has her staying in the city and celebrating with friends, plus her crush. The other has her returning home to celebrate the town’s annual traditions, alongside a friend who’s always had feelings for her.

When Emily visits her parents in her hometown, she discovers that they’re leaving for the holiday season. As she stays at home by herself, Emily’s parents’ HOA makes it their mission to have her participate in the Christmas festivities throughout town.

Annie (Rachel Boston) is the new CEO at her family’s struggling small-town cookie company. When her grandmother’s famous recipe is stolen at a Christmas party, she needs to find out who leaked it … all with the help of Sam (Victor Webster), the handsome owner of the local bakery.

A 1958 Philadelphia heiress decides to halt her wedding plans in order to make her dream come true: become a Radio City Rockette and perform in the Christmas Spectacular at Radio City Musical Hall.

A photojournalist out to make it big, Liv (Shannon Chan-Kent) gets assigned taking pictures of the Chang family’s annual Christmas party for a cover story. But when she finds herself falling for her co-worker Henry (Shannon Kook), she has to decide whether to get close to him or risk losing her big break.

Childhood friends Talia (Brooke D’Orsay) and Anderson (Ryan Paevey) reunite when they both go to a weirdly familiar-looking town that invokes the true spirit of Christmas.

The Most Colorful Time of the Year, starring Katrina Bowden and Christopher Russell

When elementary school teacher Ryan (Christopher Russell) learns he is colorblind, he enlists the help of optometrist Michelle (Katrina Bowden) to bring color back into his life.

At a 15-year high school reunion, two classmates find themselves reconnecting and rediscovering what they truly want out of the lives they’ve built since graduation.

As a workaholic bachelor, Sam (Jonathan Bennett) needs to babysit his niece and nephew when his sister and her husband need to go out of town. With the assistance from handsome neighbor Jason, he may find himself having the perfect holiday romance.

Ella (Lyndie Greenwood) returns home in the hopes of repairing her fractured family. Thanks to the help of her ex-boyfriend Griffin (Brooks Darnell), she may be able to help heal everyone’s grievances before it’s too late.

A former actress (Torrey DeVitto) decides to test out her newly-found directing skills by way of a small town’s annual Christmas Eve production.

When a matchmaker connects Molly (Yael Grobglas) and Jacob (Jeremy Jordan) together, the duo realizes a terrible thing: they both own competing deli restaurants.

All movies premiere on Saturday nights at 10 p.m. ET, which means you can watch two new Hallmark Christmas movies back-to-back throughout the holiday season!

Julie (Erica Durance) is a single mom who has to face her first Christmas without her husband. Still, thanks to her older neighbor Irene (Lynn Whitfield), she may have a different holiday season than expected.

Danielle (Erin Cahill)’s husband goes missing in action while on deployment, leaving her to raise her daughter as a single mom. When three years after the incident approaches, she begins to share stories of life before the moment with loved ones.

Erica (Peyton List) has been a rancher working with her mother and sister on their family farm. But when Aaron (Andrew Walker) suddenly arrives, she starts to wonder whether she wants something more out of life.

Hayley (Taylor Cole) is an interior designer who wants to give her recently widowed mother the best present she knows: the extended family she’s always wanted.

Time for Him to Come Home For Christmas, starring Holland Roden, Tyler Hynes and Tenille Townes

Executive produced by The Voice star Blake Shelton, this movie follows Elizabeth Athens (Holland Roden) as she gets a voicemail from a number she doesn’t recognize. The message reveals a man she doesn’t know trying to get the love of his life to give him a second chance at a happily ever after.

A new angel (B.J. Britt) wants to work on repairing his one regret in life: Not helping his sisters reunite while he was alive. His solution: to return to their hometown as a stranger and convince them to revive their parents’ old holiday tradition at Christmas.

The Gift of Peace, starring Nikki DeLoach and Brennan Elliott

Traci (Nikki DeLoach) was once a devout Christian before her husband died tragically. As she prepares to spend her second holidays without him, she decides to check out a support group to help with the pain and comfort.

Inspired by singer Scotty McCreery‘s hit “Five More Minutes,” a young widow wishes for her son to experience the best Christmas. Her wish comes true unexpectedly when she returns to their old home for the holiday season.

As the entertainment and news editorial assistant for Good Housekeeping, Adrianna (she/her) writes about everything TV, movies, music and pop culture. She graduated from Yeshiva University with a B.A. in journalism and a minor in business management. She covers shows like The Rookie, 9-1-1 and Grey’s Anatomy, though when she’s not watching the latest show on Netflix, she’s taking martial arts or drinking way too much coffee.

Saie Beauty and Reformation Have Dropped a Beauty Collab 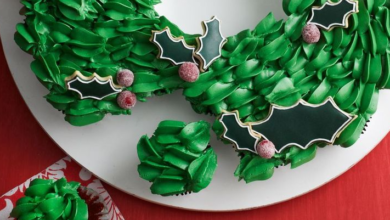 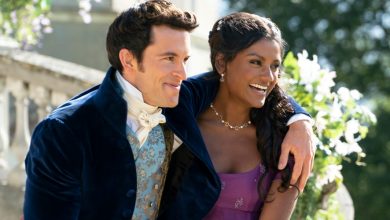 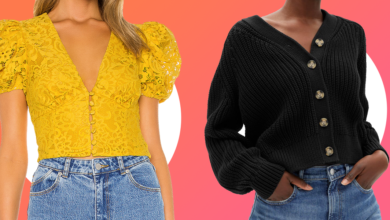