On Thursday, Sony television shared a video promo from the sets of Kaun Banega Crorepati 13 on their Instagram handle. The promo features Neena Gupta, Gajraj Rao along with Amitabh Bachchan. In the video, Neena Gupta can be seen asking the show host Amitabh Bachchan a bunch of questions. Neena Gupta said, “Main bhi puchu kuch baatein jo aap sach sach bataye? (I will also ask a few questions that you will answer truthfully?),” to which Amitabh Bachchan replied, “Haan, haan, kyun nahi. Ye toh imtihaan ho gaya humara (Yes, yes, why not! This looks like a test).”

Neena then asked a couple of questions, one of which was: “What was the most challenging role of your career?.” “Dekhiye, prati ek film jo hai, mere liye ek chunauti hai (every movie is challenging for me),” said Amitabh Bachchan. Neena further asked: “If you had to reject a film, what excuse would you make?” to which Amitabh said, “Film mile toh sahi na (Let me get films first)”.

Neen Gupta then questions him: “Kisi cheez se bachne ke liye, kya aapne kabhi apne partner se jhoot bola hai? (Have you lied to your partner in order to save yourself from a situation?)” Amitabh, instead of responding to the question, looked towards Gajraj Rao. “Pehle aap boliye (First you tell).” “Peeche baithi hai (She’s sitting behind you)” Amitabh Bachchan added while referring to Gajraj Rao’s wife.

Amitabh Bachchan left everyone in splits when he jokingly said to Neena Gupta that he lies to his ‘partner’ – wife Jaya Bachchan almost every day.

Meanwhile, Neena and Gajraj Rao are among the many celebrities who appeared on the show on the finale week of KBC 13. The final episode will of the show will go on air on Friday.

The Night I Found a Lump in My Breast 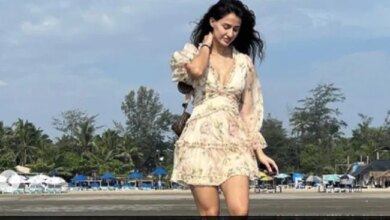