Last Saturday was an uncharacteristic day in the National Hockey League. It’s normally a very busy night, but we had just five total games. That wasn’t a problem this week, as the day was chock full of hockey with no cancellations and a full slate.

The afternoon started off with a very entertaining game in the standalone day contest in Buffalo. It ended up well after midnight on the east coast, with the Canucks surprising the Jets in Winnipeg, snapping some huge one-sided trends. In between we had a slew of one-goal games, including five games decided in overtime, one in a shootout and one other in regulation.

We had plenty of big fantasy performers, the stars shined brightest in crunch time and we also had a shutout against one of the hottest teams in the league. Let’s get started!

The Devils and Sabres played a scoreless first 20 minutes, but the game got much better as it went along. In the second period, Eric Staal rang one off the post and in, his third of the season, to give Buffalo the first lead. Ty Smith responded on the power play, helped out by P.K. Subban and Pavel Zacha, to knot the game at the break.

In the third, Andreas Johnsson scored his first at 1:37, and Tobias Rieder responded 41 seconds later to even the score again. Victor Olofsson erupted on the power play for his fourth of the season, before Janne Kuokkanen pulled the Devils even with his first of the season. The seesaw battle continues into overtime, where neither team was particularly interested in playing for anything more than the shootout.

Jack Eichel, who left the game briefly due to an upper-body ailment, returned to action in the third. He is on record talking about how difficult it is to lead off the shootout, but he snapped one past Scott Wedgewood for the only goal of the extra session. Linus Ullmark stood tall, saving attempts by Jesper Bratt, Nikita Gusev and Kyle Palmieri for the win.

Penguins head coach Mike Sullivan has been letting Tristan Jarry work through his issues, but he awarded Casey DeSmith with his third start in this one. And DeSmith won for the third time in as many outings. He made 30 saves on 34 shots in the overtime victory.

Like the afternoon game, this was a seesaw affair. Jason Zucker opened with a goal, while Brendan Lemieux responded four minutes later. Brandon Tanev restored the lead near the end of the first to make it 2-1.

The second period was crazy, as Kevin Rooney ended up with a shorthanded goal, Chris Kreider had an even-strength goal and Artemi Panarin struck with a power-play marker. Kasperi Kapanen posted the only goal for the Pens, as New York took a 4-3 lead to the break. Jake Guentzel wouldn’t be denied, tying it up 4-4 and forcing overtime.

That’s when Sidney Crosby took over. He only took two shots, but the game winner came off the stick of Sid the Kid. That made Pittsburgh fans feel better, as Kris Letang left with an undisclosed injury in the first period. Pierre-Olivier Joseph stepped up with three assists to pick up the slack, and he had a team-high 33 shifts and 25:58 of ice time, and he is someone fantasy owners will want to watch closely.

The Fly Guys played yet another extra session game, and they rallied around Carter Hart for the victory. He stopped 26 of 28 shots for the win.

Jakub Voracek and Kevin Hayes staked the Flyers to a 2-0 lead after 20 minutes, but Jordan Eberle and Scott Mayfield responded in the second with two goals. We had a scoreless third period before Scott Laughton won it, assisted by Shayne Gostisbehere. Semyon Varlamov was on the short end of the OT loss, and he was rarely tested, allowing three goals on 17 shots.

The B’s and Caps had another crazy battle on Saturday. And Washington welcomed back its biggest star, and he made a huge impact.

Nicklas Backstrom opened the scoring with an unassisted goal late in the first, and Trevor van Riemsdyk and Richard Panik (power play) made it 3-0 before the Boston offense woke up. Backstrom ended up with a goal and three points, while Patrice Bergeron also ended up with three helpers.

Nick Ritchie lit the lamp on the man advantage right at the end of the second, and that sparked the team. Brad Marchand notched a goal early in the third to slice the lead to 3-2.

The Bruins pulled Tuukka Rask, and it worked out. Charlie McAvoy struck for the equalized to force overtime. That’s when Alex Ovechkin took over. He was back for the first time since Jan. 14 due to COVID protocols. The goal was his 708th, tying Mike Gartner for seventh place on the NHL’s all-time list. Next up is Phil Esposito, sixth place with 717 goals.

Petr Mrazek didn’t face one shot before suffering an upper-body injury and leaving early in the first period. James Reimer took over and allowed just one Joe Pavelski power-play goal in the third. That goal came when it was 4-0.

The first period got better for the Canes after the Mrazek injury. Vincent Trocheck scored an even-strength goal, and then a power-play goal, and he returned midway through the second with the primary helper on Andrei Svechnikov‘s power-play goal. Ryan Dzingel also had a goal on the man advantage, and that sent Anton Khudobin to the showers early. It wasn’t his fault, though, as his team’s undisciplined play put him in a rough position. Joel Oettinger came on and stopped all 10 shots he faced in relief.

The good news for the Predators is that they outscored the Lightning in two of the three periods. The bad news is that Tampa lit the lamp four times in the second.

Ryan Ellis struck on the power play in the first to make it 1-0. But in the second, Tyler Johnson had a power play goal to knot the game, Callan Foote helped the Lightning to the lead, Victor Hedman added another in the first eight minutes of the second, and Steven Stamkos notched a power-play goal for the 4-1 lead going into the third.

Things got hairy for Andrei Vasilevskiy, as Mathieu Olivier had a power-play goal, and Viktor Arvidsson notched a goal with an extra attacker to make it 4-3. But that’s as close the ‘Ning would get.

The Panthers and Red Wings battle hard in the first period, notching two goals apiece. Then, nothing for the final 40:01 of regulation.

Aleksander Barkov notched a power-play goal, and Keith Yandle also had one on the man advantage with one second left in the first. Those Florida goals sandwiched markers by Anthony Mantha and Tyler Bertuzzi.

Both Sergei Bobrovsky and Thomas Greiss shut down the opposition in the second and third periods, as the game was decided in overtime.

The extra session is when Aleksi Heponiemi introduced himself, scoring his first NHL goal in OT in his debut. He is the fourth player in NHL history to score an OT goal in his NHL debut, joining Minnesota’s Kirill Kaprizov, who did it earlier this season.

The Canadiens hadn’t lost in regulation, but Jacob Markstrom ended all of that with his second shutout of the season.

Markstrom was tested early and often, making 37 saves to blank the previously red-hot Habs. He had to stand on his head, too, as Jake Allen was equally tough. He allowed just a power-play goal to Johnny Gaudreau early in the first period, and nothing else after. Mikael Backlund put a bow on the scoring with an empty-net goal to win it 2-0. Elias Lindholm has primary assists on both of the Calgary goals, while Matthew Tkachuk also had a helper.

Frederik Andersen entered on a three-game winning streak, but Connor McDavid had other ideas.

Dominik Kahun notched his first of the season, with an assist to Leon Draisaitl. William Nylander and Josh Archibald exchanged goals in the final two-plus minutes, and the Oil lead 2-1 after 20.

Connor McDavid scored on the power play, before Auston Matthews and Zach Hyman answered to level the game 3-3 after 40 minutes. Tyson Barrie had a pair of assists against his previous team.

McDavid was back in overtime with his seventh goal, helped out by Barrie and Draisaitl. The latter is now up to nine assists on the year, tied for third in the NHL. McDavid is second in goals, tied with Colorado’s Mikko Rantanen.

The Avalanche had lost 12 of their past 17 skates at the Xcel Energy Center in St. Paul. They were intent on not letting the Wild maintain their mastery in this series.

Philipp Grubauer stopped 19 of the 20 shots he faced, allowing just a Matt Dumba goal early in the first, as he improved to 6-2-0 with a 1.75 GAA and .930 save percentage. Joonas Donskoi and J.T. Compher struck on the power play, while Brandon Saad also had a score.

Rantanen also struck for his seventh goal of the season, matching McDavid for second in the NHL, behind only Vancouver’s Brock Boeser.

Anaheim’s John Gibson has been amazing this season. In this one, he didn’t have it, and he got the hook early.

Jordan Kyrou scored just 20 seconds into the game, and Zach Sanford scored his first of the season just 57 seconds in, giving the visitors a 2-0 lead. Kyrou was back with a goal at the 2:06 mark, and that was the end of the road for Gibson. Ryan Miller allowed three goals on 24 shots in relief.

David Perron scored his fourth, while Kyle Clifford notched No. 2 and Vince Dunn posted a power-play goal with Kyrou earning his third point of the night with primary assist.

Jordan Binnington cruised to the win, stopping 23 of the 24 shots he faced. The Blues looked rested after having their last game wiped out by COVID concerns in Vegas with a player and coach.

Thatcher Demko allowed one goal on 24 shots, and he received plenty of offensive support in the win. Boeser scored his seventh to open the scoring 29 seconds in, and he closed the scoring with his league-leading eighth goal of the season at 17:59 of the third period.

Mason Appleton had the lone goal of support for Connor Hellebuyck, while Nils Hoglander and Zack MacEwen got onto the score sheet for the Canucks. 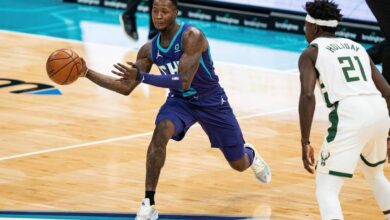 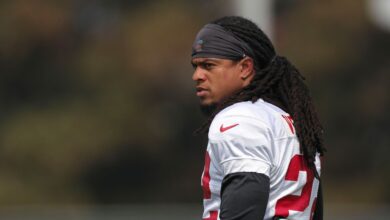 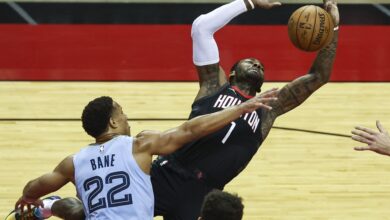