Nadal takes the lead after another love service game. The back doesn’t seem to be causing the Spaniard any issues. He’s moving well and striking the ball with his usual ferocity.

Important hold for Norrie. Saved break points as it looked like Nadal was ready to pounce. The Brit fends off the challenge to keep proceedings on serve.

Norrie highlight from the first set

Norrie made Nadal work for that game who wins it from 0-30 down to take a 2-1 lead. We remain on serve in this second set.

Norrie levels up with a quick service game of his own.

Nadal holds to get things started in this second set. Good game from the Spaniard who won’t want to be out there for too long.

Nadal takes the opening set 7-5 after breaking the Norrie serve. 48 minutes of engaging tennis from both men who exchanged breaks. Nadal will be relieved to secure that set after Norrie, who looks unfazed out there, continues to play with confidence.

Another easy hold for Nadal who puts the pressure back on the Brit.

Good hold from Norrie who draws level. Did all the basics to secure that game and continues to hit with confidence. Nadal doesn’t look all that comfortable out there which is a credit to Norrie’s game.

Nadal’s a game away from wrapping up the first set. Norrie’s causing the Spaniard a lot of problems out there which shows in the unforced error count – Nadal 14 to Norrie’s 10. Big moment coming up for Norrie here who needs to hold to prolong this opening set.

Norrie, serving with new balls, levels to love. The Brit hit an ace at 30-0 which Nadal seemed to take issue with – implying he wasn’t ready. Let’s see if things get chippy.

We’re back on serve as Nadal takes the lead after a comfortable service hold. It’s as if Nadal was disgusted with being broken in his previous service game as holds with ease to regain the lead.

Nadal breaks back immediately. The 20-time Grand Slam champion seemed to up the intensity levels to get things back on level terms.

Norrie breaks! Good pressure from the Brit to break Nadal and take a 3-2 lead. Norrie soaked up all pressure Nadal was applying. Can he consolidate ?

Another good hold from Norrie who saved a couple of break points. Norrie’s serve was looking a little shaky in the middle of that game, and he threw in a double fault before eventually going on to hold.

Another easy hold for Nadal who is hitting big from the back of the court and moving Norrie from wing-to-wing. 12 minutes in and we’re on serve.

Nadal rips a forehand winner down the line to bring a 16-shot rally to an end. Norrie registered his first point in the match at 15-30. Nadal, with the early pressure, had break point opportunities but Norrie does well to hold.

Ace to start things off for Nadal who holds to love. The back seems fine!

Players are warming up…

Nadal won the toss and elected to serve. Norrie elected a change of ends.

Seeds moving on in the bottom half

Hello and welcome to Day 6 at Melbourne Park and coverage of Cameron Norrie’s third-round encounter with world No 2 Rafael Nadal.

The British No2, who ousted fellow Brit Dan Evans in the opening round, came back from a set down to beat Russian qualifier Roman Safiullin 3-6, 7-5, 6-3, 7-6 in round two.

Nadal’s second round match was much more straightforward. The 20-time Grand Slam champion took out another qualifier in the shape of American Michael Mmoh in straight sets 6-1, 6-4, 6-2 and looked in good shape despite his well publicised back issues.

This third round match, a first meeting between the two lefties, will be played inside an empty Rod Laver Arena as a result of Victoria going into a five-day lockdown on Friday night.

Speaking to the press about the prospect of facing Nadal, the 25-year-old said: “It’s unbelievable, I never thought I would play against them [Nadal, Roger Federer or Novak Djokovic]. I was watching them when I was young and thinking it would be cool. So it’s going to be amazing.”

Read Simon Briggs’ take on the task at hand for Norrie here.

Norrie may be the only Brit left in the singles draw at the Australian Open, but there is British interest in the doubles. Fifth seeds Joe Salisbury and Rajeev Ram are going well and are through to the third round. As are sixth seeds Jamie Murray and Bruno Soares.

Heather Watson, who lost a tight three-setter to Anett Kontaveit on Thursday, is playing with the talented Canadian teenager Leylah Fernandez. The pair knocked out the 10th seeds in the first round and will look to continue their good form in the third round on Sunday. 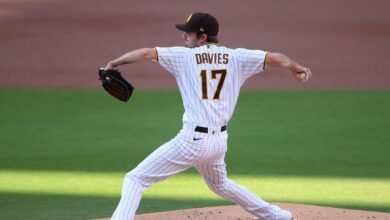 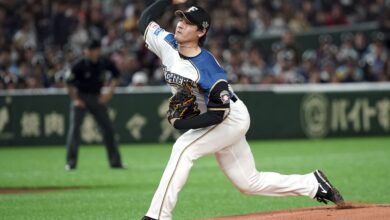