MELBOURNE, Australia (AP) — Three-time Grand Slam champion Naomi Osaka took the court on the first morning at the Australian Open and quickly moved into the second round Monday.

Osaka, who won the title in Melbourne two years ago, played the opening match in Rod Laver Arena and beat Anastasia Pavlyuchenkova 6-1, 6-2.

The first tournament of this year’s Grand Slam season began after a three-week delay because of the coronavirus pandemic.

“Physically I feel like everyone, their bodies are shocked, coming in and playing so suddenly after such a long break,” Osaka said. “I think we’re all getting used to it and everyone is just happy to be here.”

Osaka drew a potential tough opening opponent in Pavlyuchenkova, a Russian ranked 39th who reached the quarterfinals in Melbourne three of the past four years.

But Osaka breezed through the first set in 21 minutes and barely slowed after that. She finished with more winners than errors and lost only five points on her first serve.

Up to 30,000 fans — about 50% of capacity — will be allowed on the tournament site, but seats were mostly empty for the start of play on a cool morning.

Osaka is among five former Australian Open champions in the women’s draw. She has won 15 consecutive matches, including the U.S. Open final in September, since her most recent loss in a Fed Cup match a year ago. 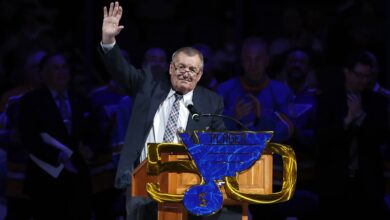 Cards get blanked at Brainerd