The central bank approved paying a higher-than-expected nearly $14 billion as dividend to the government, providing relief to Finance Minister Nirmala Sitharaman at a time when the pandemic has strained public finances. The central board of the Reserve Bank of India approved transferring Rs 991.2 billion ($13.6 billion) to the government on Friday, according to a statement from the Reserve Bank of India. The RBI pays dividends to the government every year from surplus it generates from market operations, investments and printing of currency. 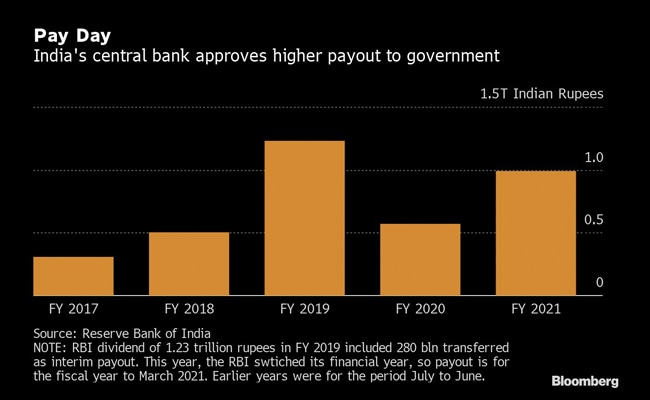 “The board in its meeting reviewed the current economic situation, global and domestic challenges and recent policy measures taken by the Reserve Bank to mitigate the adverse impact of the second wave of Covid-19 on the economy,” the RBI said.

The money represents 95 per cent of the total Rs 1.04 trillion budgeted by the government as dividend income in the fiscal year that began April 1, and is close to double the amount expected from the central bank. With the pandemic disrupting economic activity and possibly hurting tax revenue, the cash will help Ms Sitharaman keep budget deficit close to this year’s targeted 6.8 per cent of gross domestic product.

Bonds edged up slightly. The yield on the benchmark 10-year debt eased marginally after the dividend announcement and was down 1 basis point to 5.96 per cent.

The RBI transferred Rs 571.3 billion last year, but the numbers aren’t comparable because of a change in accounting year. The central bank recently switched to an April-March fiscal year from July-to-June previously, and the payment this time around is for a nine-month period.

“This higher payout will give some cushion to government finances against likely slowdown in tax revenues and privatisation proceeds due to the Covid second wave,” said A. Prasanna, chief economist at ICICI Securities Primary Dealership Ltd.

The finance minister had previously said the government would look beyond fiscal deficits to revive Asia’s third-largest economy, which is currently grappling with the world’s worst Covid-19 outbreak. A spike in virus cases prompted several states to impose localized lockdowns, which in turn forced many factories to suspend operations and eroded incomes in an economy driven by domestic consumption.

The government has in recent years been pressuring the central bank to increase its payouts, which resulted in the RBI transferring a record Rs 1.76 trillion two years ago. The central bank is still required to keep at least 5.5 per cent of its capital as risk buffer.

What is iCloud Keychain? Apple's password manager for iPhone an

RailTel Corporation To List On The Bourses Tomorrow i.e February 26, 2021