The country’s recent decline in new cases of the novel coronavirus is a “hopeful trend,” said the former head of the Food and Drug Administration over the weekend.

Dr. Scott Gottlieb during an appearance on CBS News’ “Face the Nation” on Sunday said the recent decline in cases is different than any others seen throughout the last year, as recent declines are largely rooted in the country’s intense vaccination effort. The Centers for Disease Control and Prevention (CDC) late last week said 1 in 3 U.S. adults are now fully vaccinated, while more than half have received at least one dose.

“Whereas the past trends when we saw cases start to decline, we were somewhat skeptical because we knew a lot of those declines were a result of behavioral changes, people pulling back more, taking more precautions. And then as soon as we sort of let our guard down, we saw cases surge again,” Gottlieb said. “Right now, the declines that we’re seeing, we can take to the bank.”

“I think that these declines we’re seeing are really locked in at this point,” continued Gottlieb. “So I don’t think we need to be as worried that as we take our foot off the brake, things are going to surge again.”’

The former FDA chief said Americans should not look at only the rate of daily new cases in the U.S. — but also overall “vulnerability” to the disease.

“A lot of older Americans and people who are most vulnerable to COVID, who are most likely to be hospitalized or succumb to the disease, have now been protected through vaccination and are going to be far less likely to have a bad outcome,” he explained. “So 10,000 cases right now is a lot different than 10,000 cases a year ago when the most vulnerable Americans had no protection from this disease.”

He noted that the country may not drop below 10,000 new daily cases in the near future, but noted that “we need to look at those cases differently.”

“They’re going to probably represent much less disease, much less death because most of the most vulnerable Americans will have been protected through vaccination. So we need to look at these things differently,” he added.

Rather, Gottlieb advised looking at the country’s COVID-19 hospitalization rate to better understand the impact the virus is now having within the U.S.

Gottlieb also spoke to the CDC reportedly looking into shifting its guidance on face masks, with a possible shift in federal recommendations on wearing masks outdoors soon to come.

Alex Rodriguez Won't 'Give Up' on Jennifer Lopez After Split 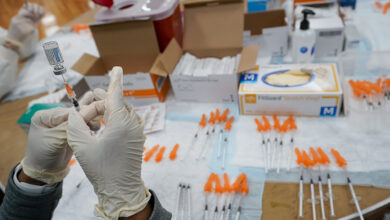