Sealing it with a kiss! Rob Gronkowski won his fourth Super Bowl championship on Sunday, February 7 — and he celebrated the milestone with a kiss from girlfriend Camille Kostek.

The model, 28, posted a photo to Instagram of herself giving the NFL tight end, 31, a big smooch after the game. “Tastes like a champion ❤️❤️❤️,” she captioned the sweet pic. “ILY @gronk.”

Kostek also shared a photo with Gronkowski and his mother as the trio posed with Bud Light beer after the victory. She then uploaded a celebratory video with Giselle Bündchen, the wife of Gronkowski’s teammate Tom Brady, that was set to Sean “Diddy” Combs’ 2001 hit “Bad Boys for Life.”

She continued sharing several game-day posts via her Instagram Stories, including a selfie where she wrote: “I have already lost my voice. Proud gf over here.”

After playing in his sixth Super Bowl on Sunday, Gronkowski earned his fourth Super Bowl ring with the Tampa Bay Buccaneers. The Florida-based team beat the Kansas City Chiefs 31-9.

The New York native entered retirement in March 2019 following a nine-season run with the New England Patriots. He returned to the league in March 2020 after Brady, 43, convinced him to play alongside him with Tampa Bay.

Following Sunday’s win, NFL reporter Albert Breer tweeted that Gronkowski called it “hands down, one of the greatest accomplishments in sports history.”

Gronkowski’s longtime girlfriend was there to support him along the way. The pair began dating in 2015 after meeting two years prior while volunteering at a Goodwill event before Thanksgiving.

“He ripped off his ‘Hi, my name is Rob Gronkowski’ sticker on his shirt,” she recalled on SiriusXM’s “This Is Happening With Mark Zito and Ryan Sampson” on Friday, February 5. “So, he had written on the back of it his phone number and then he wrote, ‘Shhh’ because he knew it was a secret.”

Kostek, who was a Patriots cheerleader at the time, remembered being “so scared” when retired tight end Jermaine Wiggins delivered Gronkowski’s note with his phone number. “I was like, ‘Oh no, no, no, I can’t take this. I can’t take his number.’ And then [Jermaine] was like, ‘Just take it,’ and I was like, ‘OK,’ and I put it in my pocket,” she explained. “And I never spoke about it again. I didn’t make it locker room talk. I never spoke about it.”

The Sports Illustrated model went on to FaceTime the footballer several days later, and the pair have been going strong ever since.

Early last year, Kostek revealed to Fox News how they have continued to grow closer while quarantining together. “We’re always living that ‘never not dancing’ life. We just turn up the music wherever we are — whether it’s the kitchen or backyard — and just dance it out,” she shared in April 2020. “The new joke is that he’ll come up to me and say, ‘Hey, I want to learn that neat dance move you did today.’ It’s our way of moving and working out. But it’s almost like a brain game because choreography and rhythm are challenging. But he loves it. And this is all just super fun for me.” 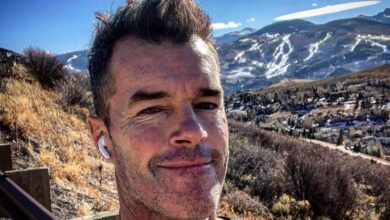 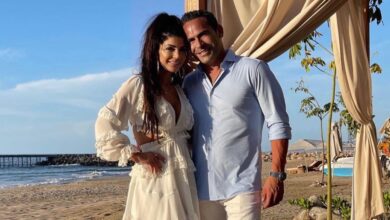 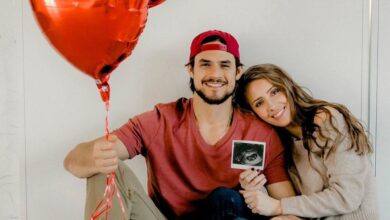 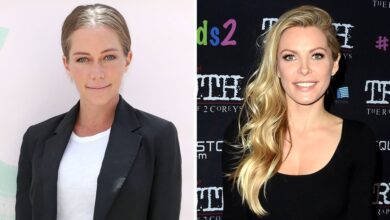