The Indian equity benchmarks erased gains in late morning trading owing to weakness in heavyweights like Reliance Industries, Infosys, Larsen & Toubro, Axis Bank, ITC and Bharti Airtel. The benchmarks opened higher but soon came under selling pressure as investors resorted profit booking after a strong post-Budget rally wherein the Sensex and Nifty rallied over 10 per cent in a matter of six trading sessions. The Sensex fell over 500 points from the day’s highest level and Nifty 50 index touched an intraday low of 15,006.

On the other hand, media, realty and financial services indexes were among the sectoral gainers.

Mid- and small-cap shares were trading on a mixed note as Nifty Midcap 100 index rose 0.12 per cent and Nifty Smallcap 100 index advanced 0.64 per cent.

The overall market breadth was negative as 1,256 shares were advancing while 1,404 were declining on the BSE. 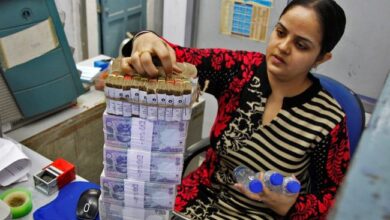 Petrol, Diesel Rates Unchanged For 22 Days In A Row