India’s economy showed signs a recovery is taking root as waning virus cases and a vaccine roll-out supported sentiment and as focus turns to further stimulus possible in the upcoming federal budget. The needle on a dial measuring overall economic activity was unchanged at 5 last month, indicating the economy was coasting along in the fast lane. Although seven of the eight high-frequency indicators tracked by Bloomberg News held steady and one deteriorated, the gauge uses the three-month weighted average to smooth out volatility in the single-month readings. 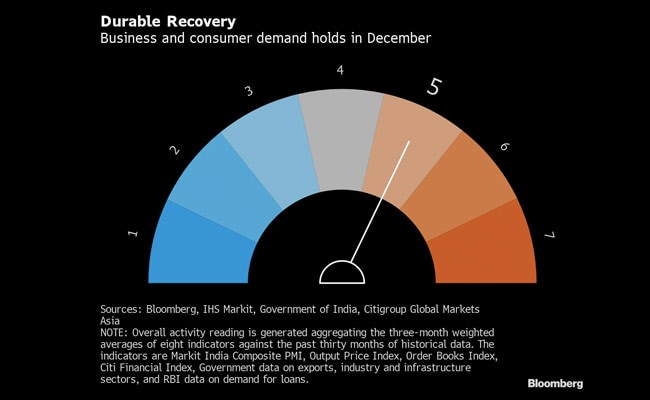 With new infections dipping sharply over the last few months and a nationwide vaccine roll-out put in place this month, consumer confidence and demand look set to grow further. The recovery might get a boost from fresh stimulus in the upcoming budget, which Finance Minister Nirmala Sitharaman will present February 1, one of the most high-profile and highly anticipated events on the government’s calendar.

Activity in India’s dominant services sector expanded for a third straight month in December, although at a slower pace. The Markit India Services Purchasing Managers’ Index came in at 52.3 in December from 53.7 a month earlier, with a reading above 50 indicating expansion. Hiring activity, however, suffered due to liquidity concerns and labor shortages, among other issues. 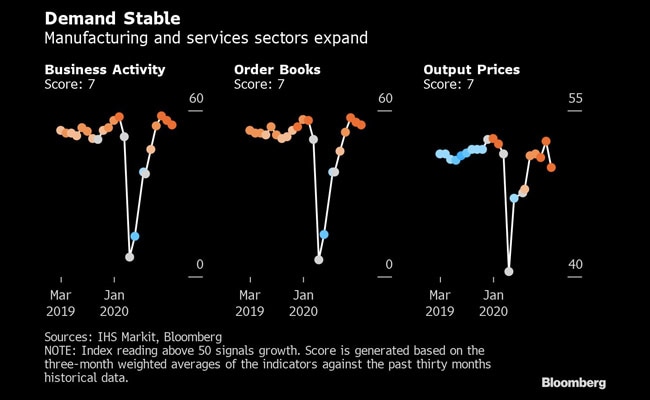 Manufacturing activity continued to strengthen in December, with businesses stepping up production amid efforts to rebuild inventories. The seasonally adjusted manufacturing Purchasing Managers’ Index was at 56.4, a tick higher than November’s 56.3.

Input price pressures were witnessed broadly across both sectors, a factor that is likely to prevent headline inflation from easing sharply in the coming months. 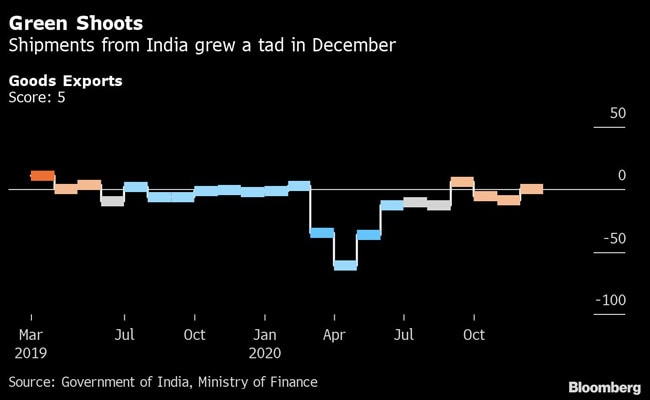 “While intermittent hiccups may persist, we are hopeful that the performance of exports will strengthen in the coming months, as the Covid-19 vaccine roll-out gathers speed in the major trading partners,” said Aditi Nayar, principal economist at ICRA Ltd, in New Delhi.

With activity in the economy normalizing, imports also picked up last month and the trade gap expanded.

Passenger vehicle sales, a key indicator of demand, rose nearly 14 per cent in December from a year ago, with two-wheeler sales witnessing robust growth. The Reserve Bank of India said in its latest monthly bulletin that the employment situation would brighten in the coming months and that could give a boost to consumer confidence, setting the economy up for a V-shaped recovery. 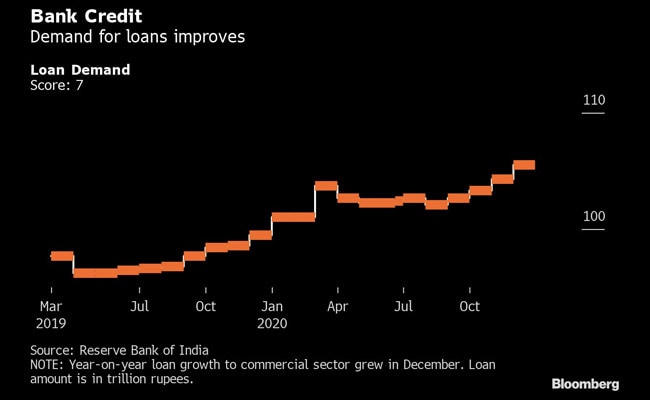 Demand for loans picked up from lows seen in October. Central bank data showed credit grew at more than 6 per cent as of end-December from a year earlier — higher than the 5.1 per cent growth seen in the second half of October. Liquidity conditions were tighter amid advance tax outflows last month.

Industrial production shrank 1.9 per cent in November from a year earlier. Production of capital goods declined 7.1 per cent, although infrastructure and construction goods showed a slight expansion of 0.7 per cent from a year ago.

Output at infrastructure industries contracted 2.6 per cent in November from a year ago. The sector, which makes up 40 per cent of the industrial production index, had contracted by a record 37.9 per cent in April. Both data are published with a one-month lag.

New chart shows China could overtake the U.S. as the world's largest economy earlier than expected

Services Growth At One-Year High On Boom In Domestic Demand