Tesla offers a strong product line-up, which includes the Model S, Model 3, Model X, and the Model Y, and the company battery technology is a big part of it. Read on to know more about that.

Currently, the Lithium-Ion batteries used in Tesla cars are sourced from Panasonic

Tesla Inc. is one of the foremost electric vehicle manufacturers in the world, last year, the company also became the most valuable automaker, surpassing mammoths like General Motors, Toyota and Volkswagen. The brand success in the recent times is defined by its strong product line-up, which includes the Model S, Model 3, Model X, and the Model Y, and the company battery technology is a big part of it. So, as the company gears up to make its entry into the India market this year, let us tell you all about the company’s vehicle battery technology.

Also Read: All You Need To Know About the World’s Most Valuable Carmaker – Tesla

Now, Tesla currently a range of Lithium-Ion batteries starting from 50 kWh to 100 kWh, across its model line-up. These batteries use thousands of small Lithium-Ion cells, which are sourced Japanese tech giant, Panasonic, in fact, Tesla was the first automaker to use such batteries, which were earlier mainly used in consumer electronics. Tesla cars’ platform is designed is such a manner that the batteries are placed under the vehicle floor, thereby not only offering a better centre of gravity but also saves interior and boot space.

Also Read: Tesla Buys $1.5 Billion Worth Bitcoins; It Could Offer Payments In Crypto 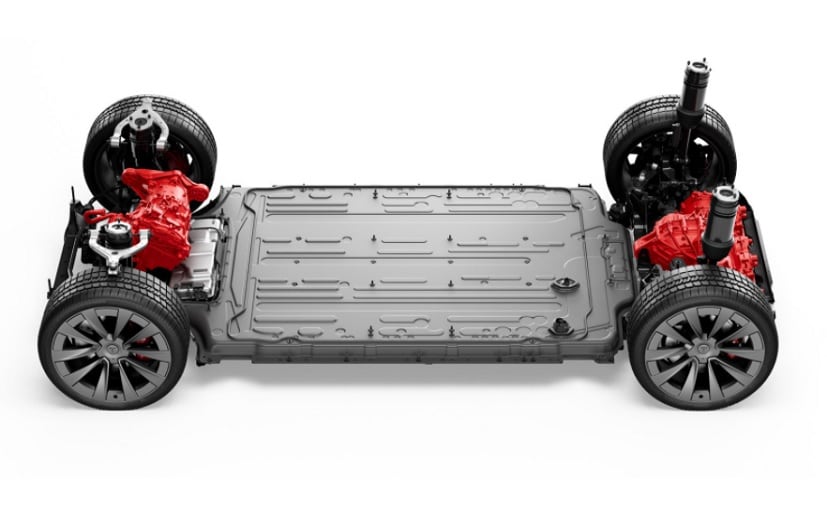 In Tesla cars, the batteries are placed under the vehicle floor, thereby offering a better centre of gravity

In the case of the Model 3, the entry-level electric sedan comes in three options – Standard Plus, Performance, and Long Rage AWD. The Standard Plus trim offers a range of up to 423 km and the battery can be charged up to a maximum of 170 kW Supercharger. The Performance model offers a slightly higher range of 507 km and has a charging capacity of 250 kW, while the Long Range model offers a range of 568 km and the same charging capacity of 250 kW.

Also Read: Why Tesla’s Launch Is A Big Deal For The EV Infrastructure Of India

The Tesla Model S offers the longest range among all models in the line-up, which goes up to 663 km

The Model S and the Model X come with a similar battery capacity and performance. Both we recently updated and now come in two options – Plaid and Long Range. The Model S Long Range comes with a comes with an estimated range of 663 km, with a peak power of 661 bhp, however, the Plaid trim offers a range of 628, but peak power stands at 1,006 bhp. The Long Range Model X on the other hand offers the same power output, however, the range is reduced to 580 km, owing to its bigger size and weight. Similarly, while the Plaid trim offers the same 1,006 bhp, its range is lesser at 547 km.

The Model Y, on the other hand, is based in the same platform as the Model 3, so it too comes in the same three options – Standard Range, Performance, and Long Rage AWD. However, as in the case of Model X, due to the extra size and weight of the Model Y, it offers a lesser range. The Standard Range trim offers 393 km, the Performance trim offers a range of 488 km, and the Long Range variant offers 525 km.

Tesla is expected to start its India operations with the Model 3, and the company has already registered an Indian subsidiary in Bengaluru, Karnataka. Tesla is reportedly in talks with 5 Indian states, including Gujarat, to set up its operations in the country.

BMW F 900 XR Wins The Adventure Motorcycle Of The Year