Dogs talk with their bodies. It can happen so fast that we miss subtle nuances, and then we wonder why they behave a certain way. To understand our pups better, we must learn to pay better attention to their body language. Dog paw lifts are one expression that often go ignored, except by hunters, of course, such as in the image below of a bird dog. Here, your dog lifts a paw and positions his ears forward in alert, directly stares at prey, put his tail out and poises his body to create a message of high drive and excitement, not anxiety.

It’s the paw lifts by non-hunting dogs that can be a sign of anxiety, stress, and/or fear. I translate this body language in my Dog Decoder smartphone app using illustrations by Lili Chin of Doggie Drawings. There are 60 different poses and scenarios. Each pose features three parts; The Pose, The Info and The Details about the pose and the app’s star, Diamond: 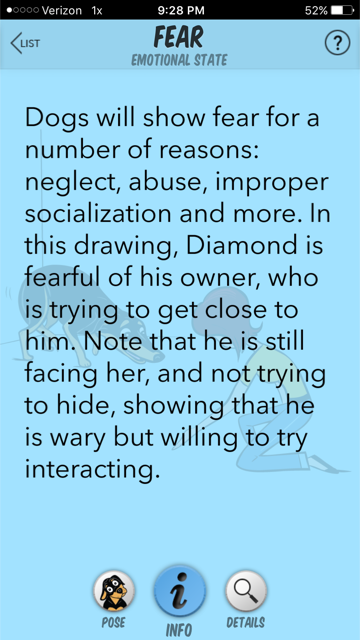 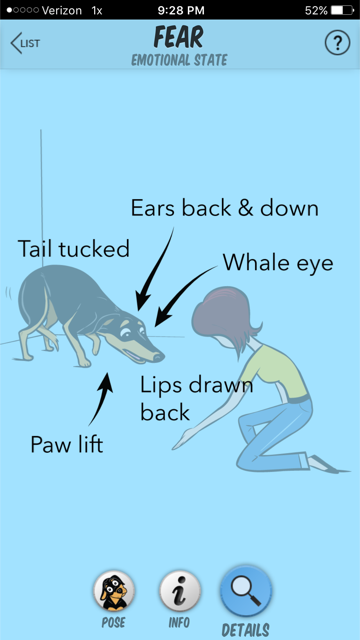 In the above illustration, a dog is showing fear in multiple ways, including a paw lift. Dogs will often lift a paw when anxious, so it’s important to look at all of the body — including ears, tail, eyes, and paw — when reading your pup. It’s also important to speed read. Dogs talk a mile a minute with their body, changing signals in an instant. Don’t be discouraged if you miss subtle signs at first — the more you pay attention, the better you will be at understanding your dog.

In fact, I have a mantra all of my clients use whenever they are with their dogs. In training, just hanging out, playing fetch, riding in the car… they ask themselves, “What does my dog need now?” This helps them become more aware of what their pup is saying. Try it yourself!

2. Sometimes, a dog lifts a paw in anticipation 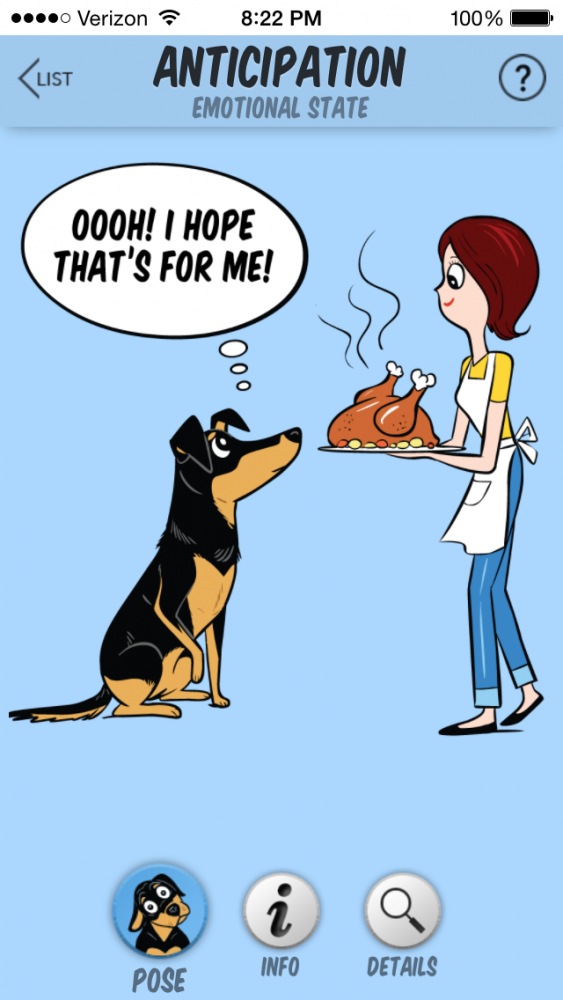 Paw lifts also can be an expression of anticipation, as shown above. In this context, you see that Diamond has high hopes that the turkey is for him. Ears and eyes alert, head and sniffer up and ready, tail out, and a paw lifted combine to signal anticipation.

Dogs also may tuck a paw to convey fear. Typically, when a dog tucks a paw while lying down, it’s a sign of relaxation, but not always as shown in the image above. Diamond is hiding under the table, not wanting to interact. Notice that his left front paw is tucked and he is indirectly staring at the boy. Diamond also has pulled his body in and away from the boy, becoming small and tight — these are all signs that he is scared and could bite. If the boy doesn’t retreat or the parents don’t step in to translate these “stay away” signals, he could be in serious danger.

Bottom line: Keep an eye on your dog’s paws

Often, when a dog lifts a paw or tucks it, it’s one of the first signs of stress, and if it goes unnoticed could lead to, at best, frustration for you if an undesired behavior follows — at worst, it could lead to a bite.

Our dogs rely on us to learn their language, and by gaining this skill, you’ll find that your dog is not being “stubborn” or “bad.” Instead, you will understand that he is anxious, excited, or afraid. With this newfound knowledge, you’ll be better equipped to help your dog.

For more insight, download the Dog Decoder smartphone app via iTunes and Google play. You can also learn more from Sarah Kalnajs’s DVD The Language of Dogs as well as from the book Decoding Your Dog: Explaining Common Dog Behaviors and How to Prevent or Change Unwanted Ones by John Ciribassi, Debra Horwitz, and Steve Dale.

Read Next: 6 Things to Remember When You Have a Fearful Dog

Why's it hard for World Series winners to repeat? That will be Dodgers' big challenge