Elizabeth Chan is very clear on the matter: Christmas is not a competition.

“You can love whatever you want about it as much as you want,” Ms. Chan, 42, said. “It’s how much it fills you with joy, and everybody has different levels of joy in their heart. But that doesn’t mean one way of being is better than another.”

These are all very reasonable points. Very gracious, too. But there is no altering the fact that Ms. Chan wins Christmas. Hands down. Game, set and match.

It is not because she named her daughters Noelle and Eva (for Christmas Eve). Or because the palette of her apartment in Lower Manhattan tilts toward a rich dark red and celadon green. Or because she has half a dozen Advent calendars in heavy rotation. Or even because the fragrance of the liquid hand soap in her kitchen and bathrooms is generally limited to gingerbread, peppermint, pine fir and such. (Ms. Chan stocks up when the holidays are over and everyone else has moved on from spiced plum and winterberry.)

A new perspective: “When I became a mother, my music changed immediately, because suddenly the story of the birth of Jesus and the story of trying to find a place for the baby became very relatable.”

It’s because of this: Since leaving her job as a marketing executive a decade ago for what, at the time, seemed like a quixotic pursuit, Ms. Chan has written more than 1,000 Christmas songs (she stopped counting at 1,200) in assorted genres — pop, jazz, disco, electronic, you name it — and recorded 12 albums of her holiday-themed compositions. Some have turned up on Billboard’s adult contemporary and holiday charts. She also ghostwrites Christmas songs for performers who need a Santa’s helper.

Like its predecessors, her latest collection, “12 Months of Christmas,” released in October, plays around the country in malls and stores like Walmart, Ikea, Pottery Barn and Williams Sonoma, providing Ms. Chan with an annual income that she says is in the high six figures — there’s no business like Ho-Ho-Ho business — and prompting some in the industry to refer to her as the Queen of Christmas. (Last year, when Mariah Carey, she of “All I Want for Christmas Is You,” filed an application through her company to trademark the phrase “Queen of Christmas” for future use on products like music, perfume, sunglasses and even coconut milk, Ms. Chan opposed the registration, believing that no one should have exclusive and permanents rights to the title. Ultimately, she prevailed.)

Creatively and fiscally, Ms. Chan has gone far. Geographically, it’s a different story. She grew up in Battery Park City and has remained there even after 9/11 caused many, including her traumatized parents, to relocate.

“I couldn’t think of anywhere else to go,” said Ms. Chan, who found a one-bedroom rental blocks away from her childhood apartment. “I thought it was going to be temporary. I think I’ve stayed because every Christmas song I’ve written has been written here.”

When Ms. Chan married 13 years ago, her husband, Andy Fraley, who designed her website and also designs her album covers, joined her in the apartment. And when she decided to ditch corporate life and become a struggling artist, the couple stayed put, although it meant making room for six keyboards, three guitars, a ukulele, a Chinese stringed instrument called a gu zheng, speakers and then, eventually, their first child, Noelle, now 5, and the attendant baby paraphernalia. Oh, and did we mention the dog?

Four years ago, through a local mothers’ group, Ms. Chan learned that a family in the building was moving to New Jersey and was hoping to find someone to take over their two-bedroom apartment.

Ms. Chan puts a heavy emphasis and great value on home. Many of her songs have the word “home” in the title or the lyrics. Home frequently figures in conversations with her. Dilating on the topic, she gets unapologetically weepy.

Even though the family has settled fully into the more spacious apartment — their numbers now include Eva, 2 — Ms. Chan clings to the other space because that, too, is her home. It’s easily identified by the sleigh bell-encrusted Christmas wreath.

“In the way you walk into your house and it smells familiar — that’s this place, for me,” she said.

There she wraps and hides her children’s Christmas presents, writes songs, does business Zoom calls and records promos for the radio stations that play her music. Ms. Chan gets inspiration from the fully decorated artificial Christmas tree that, like the wreath, remains in place year-round; from the decorative holiday pillows, of which there are many; and from a photo of her maternal grandmother presiding over a Christmas pageant in her village in the Philippines. “She taught me what matters,” Ms. Chan said.

On a Friday morning in early December, the holiday spirit was ascendant two floors up, in the family quarters. The bookshelves had been given over to displays of Lego Christmas Village scenes and a Fisher-Price Little People Nativity set. Red stockings were hung with care over the red-painted wood console. A “Santa Stop Here” tree-topper was ready to be put in place, and the marble-topped dining table where Ms. Chan sat, a decade ago, to map out her business, had been cleared off to make room for a gingerbread house or two.

“This is what Christmas looks like to me,” she said, gazing around the living room. “I wouldn’t feel comfortable living anywhere else. Since my songs are focused on love and family and home, uprooting would affect my music.” 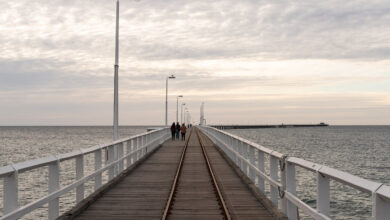 As More Australians Migrate to the Coast, Development Follows 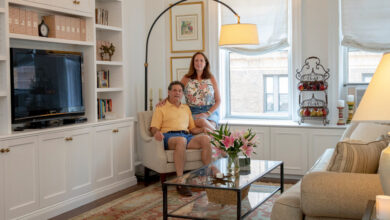 Return of the Pied-à-terre – The New York Times 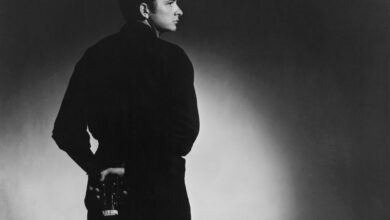 Can I Still Dress All in Black? 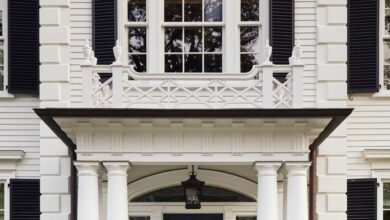 Want to Increase Your Home’s Value? Start With the Entrance.