Annaatthe Review: Rajinikanth in a still from the film. (Image courtesy: YouTube )

It goes without saying that subtlety and restraint, as words and as notions, have no currency in the Rajinikanth universe. Their absence usually works to the superstar’s advantage. In Annaatthe, the septuagenarian actor’s first collaboration with Tamil hitmaker Siva, who, too, has no patience for temperance, it does not. It yields a film that goes the whole hog with its melodramatic, blathery methods. Excess has a limit. Annaatthe runs out of tricks pretty quickly.

The tawdry and loud 163-minute Rajinikanth vehicle, now playing on the big screen, is centered on a brother and sister relationship, which is used as a pretext to give the lead actor a free rein. The relentless energy that the veteran of many such concoctions exudes as he delivers homilies, dances and fights is nothing if not eye-popping. Sadly, in the absence of a coherent screenplay, Annaatthe is also brain-numbing. Add to that a relentlessly ear-splitting background score and assault on the senses is complete.

The film’s introductory song, which follows Rajinikanth’s grand entry scene, lays it on so thick that everything that follows pales in comparison. When he talks it is a style, when he dances it is a celebration and when he fights it is fireworks, the lyrics of the robust D Imman-composed number emphasizes. Need we add that when Rajini walks, the earth – and anyone who crosses his path – quakes?

Talking of fireworks, Annaatthe has enough of it to last Rajini fans several Diwalis. As for actual fire, the film banks entirely on borrowed ideas and cannibalized devices. What is most disappointing, if not wholly unexpected, is that it peters out rather tamely by the time the protagonist is ready to confront a pair of villains – two estranged half-brothers – in Kolkata, where his sister is in big trouble with the underworld.

Little thought is devoted to either weaving the city into the heart of the story (much of the film has been shot in Lucknow) or giving the two caricaturized baddies something genuinely meaty to hurl at the hero who can do no wrong. The back stories of these two evil blokes, Manoj Parekar (Abhimanyu Singh) and Uddhav Parekar (Jagapathi Babu), are given short shrift. A wronged wife, a concubine, an illegitimate child and and patricide are thrown in to explain the bad blood between them.

No character in Annaatthe barring Kalaiayan (Rajinikanth), a righteous and tough village headman, emerges from the bloated wreck with his or her broad outlines visible and comprehensible. Somewhere in the clutter is Nayanthara in the role of an upright lawyer who strings a client along in response to Kalaiayan’s assertion that “justice” is greater than “truth”.

She is the do-gooder’s romantic interest but has to be content with only an extended cameo in which she becomes a willing associate of Kalaiayan’s as he keeps a watch on his harried sister to shield her from the bad guys. That is a whole lot better than what is reserved for Prakash Raj, Khushbu Sundar and Meena, who do their bit in the first half and vanish without so much as a by-your-leave in the second.

Keerthy Suresh, cast as Thangameenatchi, the young woman to whom Kalaiayan has been both elder brother and mother since the day she was born, drowns in mush. She sheds tears without let. While the lachrymose lady is always in serious danger of being dehydrated, the fate that befalls her after she marries an affluent boy in Kolkata aggravates matters. But not to worry, big brother lands in the city, finds her without breaking a sweat and then proceeds to watch over her.

The manner in which the script treats Meenatchi is not only baffling, but also infuriatingly anachronous. She is an educated girl who is home after completing her studies. It never crosses her doting brother’s mind that he might do her a favour by granting her some agency. He decides who she should marry.

Faced with the inevitable, Meenatchi says without batting an eyelid: “Your decision is my decision”. Kalaiayan makes her repeat that line several times over. A doctor is duly found for the girl and a grand wedding is planned.

But the plans go awry and Kalaiayan is left in the lurch. And once the girl moves away from the safety of her brother’s turf, she is at the mercy of the wolves. Time for Kalaiayan to swing into action. If the first half of Annaatthe is baloney, the second is worse, if that is theoretically possible.

To heighten the melodrama and to give the persona of the guardian angel the grandiose quality it requires, Kalaiayan does not appear in person before Meenatchi. The poor girl keeps asking everyone within earshot who her saviour is. Her question remains unanswered until the very end.

Annaatthe kicks off in Kolkata, where the media is agog at the exploits of a mystery man who has appeared from nowhere and sent the city’s underworld kingpins scurrying for cover. The stage is set for the Rajinikanth entry: the camera closes in on the hero as he corners a bunch of hoodlums – he has an arm resting insouciantly on the handle of a scythe, his weapon of choice. His aura sufficiently accentuated, he says he was a very different kind of man six months ago.

The action shifts to his village. What we see there does little to convince us that Kalaiayan was really any different as the panchayat chief of Soorakottai. As he goes around dispensing justice and delivering sermons in a village where he is an undisputed demigod, his tactics are no less of the strongarm variety.

Nattadurai (played by Prakash Raj), an evil landgrabber, runs into Kalaiayan, who pushes him around a bit, subjects him to preachy lectures, and finally reforms him. Once Nattadurai loses his potential to wreak any havoc, he disappears from the film and is never heard of again.

Ditto with Khusboo Sundar and Meena (two erstwhile Rajinikanth heroines) who pop up with the purpose of injecting humour into the proceedings. The duo’s attempts to turn the clock back fall flat because the characters they are saddled with are as half-baked as the rest of the film.

For some more comic relief, Kalaiayan has a chirpy sidekick Pachaikili (Soori) whose single-word response to the hero’s diktats rhyme with his name: exactly, absolutely, happily and so on. That generally is the level of the comedy in Annaatthe. Late in the film, Pachaikili helpfully reminds the audience that his name means “green parrot”.

The moniker is absolutely apt and not for him alone. What does the superstar do in this lumbering movie to help its stale cocktail of sentimentality, swag and silliness gather momentum? He parrots lines that we have heard before. That, in short, is Annaatthe: a moth-eaten mess whose mustiness even Rajinikanth at full tilt cannot mitigate. 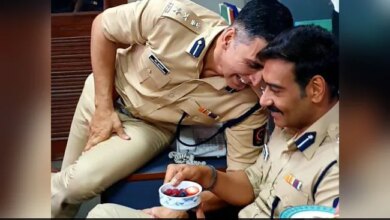 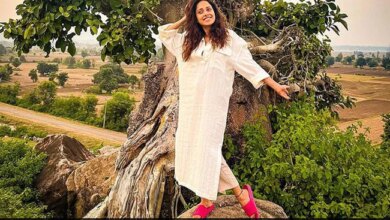 Just Pics Of Nushrratt Bharuccha Chilling In The “Middle Of Nowhere” 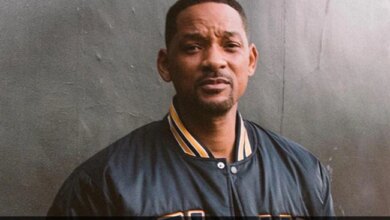