The gloves are off on Britney Spears’  Instagram. Freed from a controversial conservatorship, the singer is now going after those she sees as having been complicit in a system that robbed her of agency over her own financial affairs and life decisions. Top of Britney’s list is sister Jamie Lynn Spears who has been accused by both the singer and her fans of not only profiting off Britney’s fame but also standing down as she fought against her father’s control of the conservatorship. Britney Spears has taken aim at her younger sister in several Instagram posts and the smackdown continues in response to Jamie Lynn’s new memoir and a statement dismissing her sister.

On Wednesday, Britney Spears detailed how she went back to her family home after breaking up with singer Justin Timberlake and found her then-12-year-old sister spending her days being served chocolate milkshakes and floating in the pool. Jamie Lynn had been given her own show on Nickelodeon – Britney implied that the gig rode on her own coat-tails, writing: “How the hell does a 12-year-old land a Nickelodeon show?” She ends her description of what she recalls as entitled behaviour on her sister’s part by saying she should have been “strong enough” to slap both Jamie Lynn and their mother Lynne.

In another post, Britney Spears imagines Jamie Lynn in her place, writing, “I would honestly be very interested to see your pretty face in the setting I was forced to be in and asking yourself ‘do I matter?'”

Britney’s latest salvos are in response to a post by Jamie Lynn in which she claims her book is not about her older sister and also dismisses Britney’s posts as “vague and accusatory.” Jamie Lynn also writes that “the things being said are absolutely not the truth.” Read her post here.

Alas for Jamie Lynn Spears, public opinion is very much against her – the end of the 13-year conservatorship was heralded by a fan-led ‘Free Britney’ campaign; Jamie Lynn has been subsequently cast as the villain of the piece along with her parents after Britney’s moving testimony in court about how the conservatorship left her “traumatised.”

Britney Spears, 40, began as a child star; her super stardom as a singer spiralled into a struggle with mental health and erratic public behaviour. After a high profile romance with Justin Timberlake, Britney married Kevin Federline with whom she has two sons. The couple divorced in 2007 and Britney Spears is now engaged to boyfriend Sam Asghari.

Mahabharata Actor Nitish Bharadwaj Reveals He Filed For Divorce In 2019 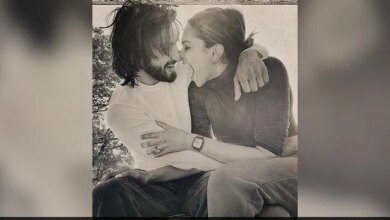 Deepika Padukone’s “Husband Appreciation Post” For Ranveer Singh Is Everything