Five now-former Michigan football players are in Mobile, Ala., this week for the Reese’s Senior Bowl, which is set to take place this upcoming Saturday (Jan. 30). Long snapper Camaron Cheeseman, wide receiver Nico Collins, running back Chris Evans, fullback Ben Mason and cornerback Ambry Thomas are all slated to participate in the annual game and take part in the activities all week.

Players’ measurables were taken on Tuesday, before some drills ensued. Wednesday, more team drills, and 1-on-1 and 7-on-7 sessions took place. Collins, in particular, impressed those in attendance, while Evans also flashed his skills.

Read notes on Wolverines from day two below.

RELATED: How Michigan Football Players Fared On Day One Of Senior Bowl Activities

• Collins’ name has come up more than a few times from renowned analysts, and he has been a player that many are watching this week, especially considering the fact that he didn’t strap up the pads this past season (opt out).

“Big, physical, build-up speed player,” ESPN analyst Mike Tannenbaum said on the network’s broadcast, describing what he sees in Collins. “He had seven touchdowns the year before. This is a big week for him, because, how does he get in and out of breaks? We want to see him against press coverage against better corners. He has a lot to gain this week. Hopefully he will work himself into the first round.”

“He’s special,” analyst Todd McShay added. “There are three or four receivers that can work themselves into the top 50, and Nico is one of them. He averaged 19.7 yards per catch in 2019. This guy is special.”

• After mixed reviews on day one — some said he had a tough time getting off the line of scrimmage, while others lauded his downfield route-running and catching — Collins was impressive in the second day of practices, coming up with numerous 50-50 balls, just like he did routinely as a Wolverine.

“A wide receiver of note would be Michigan’s Nico Collins, who opted out of the 2020 season,” wrote SB Nation’s Nick Falato. “Collins is big and athletic, similar to former Wolverine and current Cleveland Brown Donovan Peoples-Jones. Collins had one very nice contested catch and a few good reps of him sinking his hips and exploding back to the football – something that is not a given for a 6-4, 215-pound, receiver.”

Michigan WR Nico Collins will be a boundary vertical threat in the NFL. So much size/athleticism and knows how to use it. No wasted time against press, feels the CB in good position down the field so gets his body in-between the catchpoint. High points, strong tuck #SeniorBowl pic.twitter.com/AkSvYADkEU

Some impressive reps from Michigan WR Nico Collins this week. Gets the CB to miss the jam at the line, push vertical and stack, adjust and high-point the ball. Big-play traits down the field. pic.twitter.com/jqHrwcPwMq

Michigan WR Nico Collins just made a phenomenal catch. Showing himself as a nice vertical treat

Nico Collins of Michigan made some incredible receptions today and can catch the ball. That said he shows nill in the quickness/speed area and I’m concerned over the inability to separate #SeniorBowl

• After shining on day one, it was more of the same for Evans on Wednesday. He especially is impressing onlookers with his ability to change directions and catch the ball out of the backfield.

“This Chris Evans might not be Captain America, but he looked like the best running back on the American squad,” Big Blue View’s Chris Pflum wrote. “He showed quick feet and sharp cutting ability in individual drills as well as in the team periods. He also showed a very good jump cut, which allowed him to find daylight on a few occasions. Evans also stood out for his receiving ability in the team period, showing soft, natural hands catching the ball in space.”

49 receptions (56 targets) for 479yds in his career. Screens, Angles, Flares… Consistently plucks away from frame and gets upfield immediately pic.twitter.com/mtrsXX8C8c

• This comes as no surprise to Michigan fans, but Mason is being lauded for his hard-hitting nature, something he was known for in Ann Arbor.

“It’s pretty clear on an isolation run play that there’s going to be a collision but if it’s a GREAT isolation play, there’s going to be a collision heard outside the stadium,” HoustonTexans.com’s John Harris wrote. “That was the case when Purdue linebacker Derrick Barnes filled in the gap against Michigan fullback Ben Mason. My. Gosh. The collision? Steal my heart. That sound? Beautiful. Just beautiful.

• Pass blocking, on the other hand, was an area where Mason did not excel Wednesday.

“Michigan fullback Ben Mason didn’t do so well in this drill,” Falato wrote. “His feet looked slow, he lunged, and he was defeated by Browning, which seemed to be a theme in this drill.”

Ambry Thomas Has Another Good Day

• Thomas was tabbed as a player that stood out on Wednesday, after impressing with his stickiness in coverage on Tuesday.

“Have enjoyed the play of cornerback Ambry Thomas of Michigan especially in coverage drills,” wrote Dawgs By Nature’s Barry Shuck. “He has zero issues with attacking a receiver from the snap and is pretty aggressive. Can be fooled and lose a player occasionally, but with his quick recovery he is able to jump back into the play. Was very dominant in the one-on-one drills especially against Oklahoma receiver Rhamondre Stevenson.”

Michigan CB Ambry Thomas has been clamping Sage Surratt through 2 practices. Thomas has a great feel for the route pacing of the bigger-bodied receiver, with the length and competitiveness to compete for the ball #SeniorBowl pic.twitter.com/BVdYh7ivQK

Really good strength and patience at the LoS from Ambry Thomas. He’s a technician at the LoS.

Would have liked to see him show a lil more urgency to get on top of Darby’s route. Darby of course had the obvious push-off at the end. pic.twitter.com/orXcWh4B3M

• Sign up for our daily newsletter and breaking news alerts 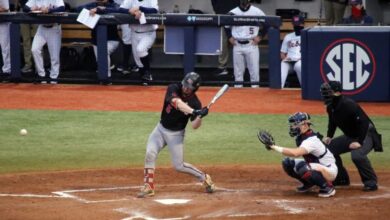 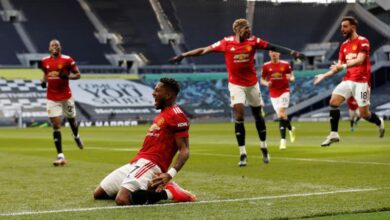 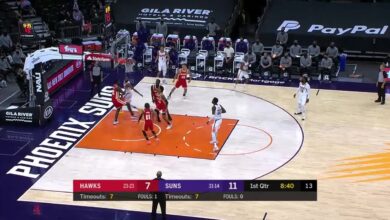