Neil Patrick Harris and his husband, David Burtka, are selling their Harlem home, a refurbished 1908 brownstone that they filled with whimsical collectibles and furnishings, from a robot parrot to the bar booth on “How I Met Your Mother,” the TV sitcom where both actors had starred. There’s even a “secret” room hidden on the top floor.

“We think of it as Willy Wonka meets the Magic Castle,” Mr. Harris said jokingly in an email about the eclectic décor.

The two are sad to be leaving the brownstone, at 2036 Fifth Avenue, between 125th and 126th Streets, but their primary residence now is in East Hampton. (They bought a 13.5-acre estate there four years ago.)

“The Harlem brownstone holds some of our dearest and fondest memories,” Mr. Harris said. “Our kids have spent the majority of their lives there. It’s a legitimately special place.”

Mr. Burtka felt much the same way about the house: “It will always have a soft spot in my heart.”

The asking price for the house is $7.325 million, with $19,712 in annual property taxes, according to Vickey Barron, a broker with Compass who is listing the brownstone with Pacey Barron, her colleague and daughter.

Mr. Harris and Mr. Burtka had bought the five-story, Italianate-style structure, near Marcus Garvey Park, for roughly $3.6 million in 2013, a year before they married, in what was then considered a lofty price for the Central Harlem neighborhood. They spent the next 14 months converting it to a single-family residence from a bed-and-breakfast, with help from the architect Jeffery Povero and the interior designer Trace Lehnhoff. In its earlier days, the building reportedly had also served as a speakeasy for Irish mill workers and a schoolhouse for girls.

The couple painstakingly restored and maintained much of the original architecture, like the carved moldings and numerous built-ins, oak floors, tin ceilings, and ornate staircase of oak, sycamore and ash, while also adding a few modern amenities and period pieces. “We both wanted to respect the history of the space, of the area, and yet make it feel contemporary and creative and accessible,” Mr. Harris said.

The 20-foot-wide brownstone has about 8,000 square feet, with four bedrooms, plus a library/den that could be converted into a fifth bedroom, along with four full bathrooms and two half baths. There is also a home theater, laundry room and a full basement with a gym, wine cellar and a playroom for their 10-year-old fraternal twins, Gideon and Harper.

The exterior space measures nearly 2,000 square feet and includes a terraced rear garden, a third-floor deck, an outdoor Jacuzzi off the primary bedroom suite, and a massive, irrigated roof deck with a barbecue and a wisteria-covered pergola.

“The roof deck is like a backyard in the sky,” Ms. Barron said, adding that “the whole house lends itself to entertainment.”

Mr. Harris and Mr. Burtka, who is also a chef, have held numerous parties and dinners there over the years. “There are just so many places to entertain,” Mr. Burtka noted. Guests often gathered on the roof deck or around a handsome wood and glass bar salvaged from a Connecticut hotel. And before they left, they were invited to pick one of the many drawers of a custom apothecary cabinet on the main floor, each filled with a playful parting gift. Some of these get-togethers were detailed in Mr. Burtka’s book “Life Is a Party,” a collection of recipes and tips on entertaining published in 2019.

Throughout the home are the couple’s collection of contemporary art from artists like Tom LaDuke and Kehinde Wiley, along with an assortment of taxidermy and magic and sideshow memorabilia, like the robotic parrot, and there’s a player piano. Mr. Harris — who has appeared in numerous films, TV shows and theater productions, including the comedy-drama “Doogie Howser, M.D.” earlier in his career — is a magic aficionado, just like his character in “How I Met Your Mother.” He has performed at the Magic Castle in Hollywood, Calif., and once served as its president.

The home’s main entrance is through a grand front door atop a classic stoop. A foyer leads to two parlors. The front portion contains the staircase (there’s no elevator), a music room, powder room and a walk-in closet. The parlor toward the back features the bar and a gas fireplace, one of three in the house. Nearby is a prep kitchen and doors to the terraced garden.

The floor below, the garden level, houses the home theater, formerly a conference room, and contains office and storage space. “It has a separate entrance,” Ms. Barron said, which might be attractive to some buyers. “If they have an office at home and you have people that need to come and go every day, they can enter without disturbing your private home, which is a huge value.”

On the third floor is a living room anchored with a fireplace, a formal dining area, and a large kitchen equipped with a pantry, custom cabinets and Caesarstone countertops with a marble backsplash. Beyond the kitchen is a deck with a built-in gas barbecue.

The bedrooms are on the top two floors. The primary suite is on the fourth level and features a spalike marble bathroom, with another fireplace and the Jacuzzi. Opposite the bedroom is a tin-ceilinged library/den.

Mr. Harris keeps an office hidden behind a trick door on the fifth floor. It opens by pressing the eyeball of a magician on a vintage poster, according a 2015 profile of the brownstone by Architectural Digest, and contains original art from the Haunted Mansion at Disneyland, more magic posters and props.

Mr. Harris, though, didn’t divulge too much about the secret room in his email. “That’s a, umm, secret,” he said, “hence the, umm, name of the room.”

Checking In: First Day of Kindergarten 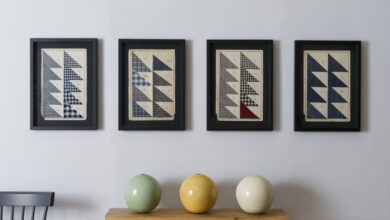 The Stress-Free Way to Hang Art 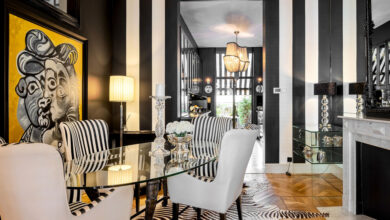 House Hunting in Belgium: A Beaux-Arts Mansion for Under $2 Million 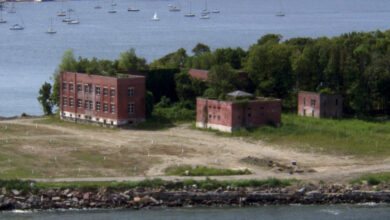 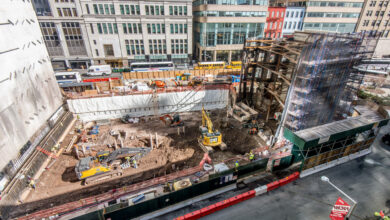