Day’Ron Sharpe ducked his head under the doorway instinctively and scanned his eyes across the apartment. Its shape was a straight line running perpendicular to him with two bedrooms and a bathroom to his left; another bedroom and bathroom to his right; and a kitchen, living room and balcony opening up in bright light from big windows before him.

In that moment, it didn’t matter that this brand-new building in Downtown Brooklyn was still coated in dust. It didn’t matter that he’d just taken an elevator that had insulation on the walls and plywood on the floor. It didn’t even matter that the construction crew had left behind a ladder and soda bottles in the living room, or that the fire alarm was shrieking a low-battery warning every 60 seconds. All that mattered was this: He could imagine himself being at home in this apartment.

Sharpe had been on his house-hunting journey for only an hour, and already he was behaving like a lifelong New York City apartment shopper. He overlooked the apartment’s flaws and instead focused on its attributes. He smiled and declared: “Oh, yeah, this is the one.”

When most people enter the work force, they get at least some say in where they will live. But that’s not the case for elite N.B.A. prospects like Sharpe, a 6-foot-11, 265-pound center from the University of North Carolina, Chapel Hill. The Phoenix Suns selected Sharpe with the 29th pick in July’s N.B.A. draft and traded his rights to the Nets. And his calendar over the next month was as crowded as the city itself. He first flew to New York to complete his physical and sign his contract. Then he returned home to North Carolina to pack his bags for Summer League in Las Vegas. He spent most of August in Nevada before making another pit stop in North Carolina on his way back to New York.

Now it was Aug. 28, and Sharpe, 19, needed to find an apartment for the first time in his adult life. And he needed to do it before the Nets began their training camp on Sept. 28.

If all of this felt overwhelming, Sharpe didn’t show it. He was dressed casually in gray sweatshorts, a black T-shirt and high-top Jordan 5s. From the back seat of his chauffeured black Cadillac Escalade, he marveled at Manhattan’s skylines and made mental notes of the restaurants people had recommended. On the way into the first apartment — a 1,600-square foot, 23rd floor three-bedroom with unobstructed views of Midtown — Sharpe saw an Ample Hills Creamery store. “That’s a huge bonus,” he said. “I’ve heard that ice cream is really good. I can’t wait to try it.”

Sharpe had several priorities for his new apartment, and fortunately, he had the budget for them. The N.B.A. employs a pay scale for first-round picks, so Sharpe will earn around $2 million this year from his Nets salary alone, and more than $6 million if he does nothing more than remain on the team’s roster for three seasons. In a city where nearly half of all households spend more than 30 percent of their income on rent, and nearly a quarter spend more than 50 percent, Sharpe’s salary is a luxury. Although his financial adviser told him not to worry about his rent, the units he considered cost no more than $10,000 a month, which would amount to about 5 percent of his gross income.

Besides staying within the budget, he wanted to be close both to the Nets’ practice facility in Industry City and to Barclays Center in Prospect Heights. He wanted a place that was pet friendly because he plans to adopt a dog. He wanted good Wi-Fi so that he could play Call of Duty: Warzone and NBA 2K. And he wanted a three-bedroom apartment so his parents, Derrick and Michelle Sharpe, and his cousin, Tre Lassiter, could live with him.

“Family is the most important thing to me,” Sharpe said. “I wouldn’t be here without them, and I’m glad they will be here with me as I get my start in the N.B.A.”

Sharpe grew up in Greenville, an eastern North Carolina city with a population a shade under 100,000. He was always a Tar Heel fan, and his childhood dream of playing basketball for them started to become a reality when he grew a foot between sixth and eighth grade and entered South Central High School at 6-foot-7. In 10th grade, he took his first trip to New York, for a basketball tournament. He gawked at the glowing billboards in Times Square and remembered thinking: “This place is seriously crowded.”

As a high school junior, he led the Falcons to a 30-1 record and an Class 4A state championship. He got his first feel for living independently as a senior in high school, when he transferred to Montverde Academy, Florida’s prep powerhouse. He shared a room — and a bunk bed — with Caleb Houstan, who now plays for Michigan. Sharpe took the top bunk so that his feet could dangle off the foot of the twin bed. “People think I need a huge bed,” he said, “but I’d be happy if I just had a queen at this point.”

Sharpe came off the bench during his single season at North Carolina, but he had an outsize influence in his 19.2 minutes per game. His 18.2 offensive rebounding percentage was No. 1 in the nation, per KenPom.com. When Sharpe declared for the N.B.A. draft, North Carolina Coach Roy Williams, who retired after the season, called him “one of the greatest rebounders I’ve ever coached.” Sharpe’s averages per 40 minutes of 19.8 points and 15.8 rebounds pointed to his potential impact if he had been given more playing time. N.B.A. teams admired his ability to pass out of the post and his comfort in playing in a pick-and-roll offensive style that dominates the league. He figures to fit into the Nets’ rotation — which is thin on big men — early on this season.

But before he finds his place with the Nets, he had to find his place in Brooklyn.

He liked the 23rd-floor unit, even though the master bedroom, he said, “was smaller than my dorm room.” His realtor, Joshua Lieberman of Douglas Elliman, laughed and told him that was something he might have to live with. But Sharpe couldn’t abide by their pet policy. The building manager told him that he could have a dog, but it would need to be on the smaller side. “I want a big dog,” he said. “I mean, really big. I’m a big guy. I can’t be out here with a little Chihuahua.”

Lieberman assured him that the issues with the second apartment — the one with the dust, the litter and the alarm — were to be expected in new construction. On the plus side, he’d be the first person to live in the unit, and among the first renters in the building, which featured a roof deck with a doggy playground, two lounges, a business center, a two-story gym with a sauna and a steam room, and a mini movie theater. Sharpe liked that he and his cousin could have adjoining bedrooms, while his parents had the master on the opposite end of the unit. “There’s two of them,” he said, “and only one of me. As long as I’ve got my bed and my games, I’m good.”

The final listing for the day was in Brooklyn Heights, closer to the Nets’ practice facility. The building somehow had even more amenities, including a dance room and a virtual golf simulator, but the unit had only two bedrooms and one bathroom, and Sharpe didn’t want to make his cousin sleep on the couch all season. Not even an envy-inducing view of the Statue of Liberty could persuade him.

After the final listing, he climbed back into the Escalade and asked the driver to take him downtown to get his parents some pizza. When the car stopped, he noticed that he was back at Ample Hills. Sharpe realized he was only a mile away from the apartment he had dubbed “the one” and he said that it was time to get some ice cream. Inside the shop, the first flavor he saw was Coffee Toffee Coffee, and he ordered it without so much as looking at more than a dozen other options. This was a day for decisiveness.

He took the ice cream outside into Brooklyn Bridge Park. His realtor pointed to a spot where the rapper Nas had performed in 2016, and then he showed Sharpe ESPN’s South Street Seaport studios across the water. Sharpe took a big spoonful of ice cream and then leaned on the rail and looked out at the water. “Mm-mm!” he said. “I think I’m going to like living here.”

The next OnePlus flagship will feature unified C 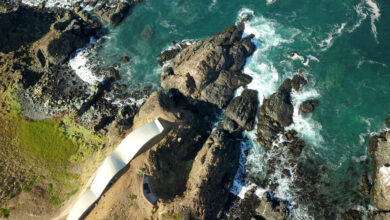 House Hunting in Chile: A Sinuous Oceanfront Wonder for $2 Million 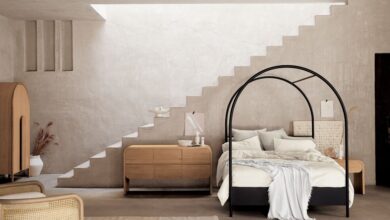 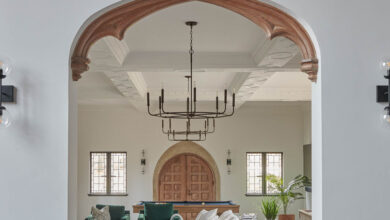 Ornament or Crime? With Painted Woodwork, There Is No Middle Ground 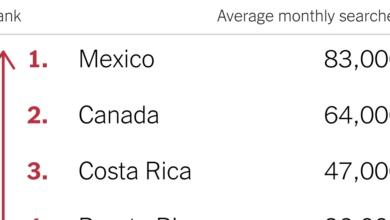