The celebrity couple and real estate aficionados, who are in the process of creating a double-wide mansion in the same neighborhood, began the year with the recorded closing on their 57 Charles Street townhouse. They sold it without listing it publicly for $15 million, which was one of the most expensive transactions in New York City in January.

The priciest closing last month was another private sale on Charles Street. The billionaire investor Barry S. Sternlicht sold his condominium at 150 Charles for $41 million. The runner-up, at $36.8 million: a 12th-floor apartment at 70 Vestry Street in TriBeCa.

Townhouses, though, remained the property of choice for many high-end buyers in search of more personal space in the city, especially during the pandemic. Several more houses closed throughout the month. Among them were two neighboring buildings on West Fourth Street in the West Village, one of which was owned by the real estate developer Ara K. Hovnanian and his wife, Rachel Lee Hovnanian, an artist.

In other notable sales, Michael Nierenberg, who runs a real estate investment trust, and his wife, Elin Nierenberg, scored a discount in Greenwich Village, closing on a sprawling penthouse for less than half its initial asking price. They made the purchase just a month after selling the Village townhouse that they had bought in 2015 from Ms. Parker and Mr. Broderick.

Ms. Parker and Mr. Broderick had paid just under $3 million for their townhouse on Charles Street in 2000. They then spent the next few years on top-to-bottom renovations to accommodate their growing family.

The red brick building, featuring a classic front stoop, stands four stories high and contains 4,182 square feet of interior space. It was erected around the turn of the last century between West Fourth and Bleecker Streets — not far from the Perry Street townhouse used as a residence for Carrie Bradshaw, Ms. Parker’s character in the “Sex and the City” TV series.

Ms. Parker and Mr. Broderick, a Broadway actor, have long been active in New York’s real estate market. They also owned a townhouse at 20 East 10th Street in Greenwich Village, which they sold in 2015 to the Nierenbergs for $18.25 million. A year later, using a trust, they paid $34.5 million for two adjoining brick buildings on West 11th Street in the West Village — Nos. 273 and 275 — that they are now combining.

Mr. Sternlicht’s apartment, a penthouse duplex at 150 Charles Street, would have made a glamorous backdrop for a show like “Sex and the City,” with its impressive views of the Hudson River, Statue of Liberty and cityscape.

The nearly 5,700-square-foot apartment sits on the ninth and 10th floors of the 15-story brick-and-glass condo. It has five bedrooms, five full baths and one half bath, along with a high-ceilinged great room and a library. Plus, there are two landscaped terraces totaling more than 2,700 square feet.

The sale, for $41 million, included a separate studio on the second floor. The buyer’s identity was shielded by the limited liability company 9C.

Mr. Sternlicht, who runs the Starwood Capital Group, which invests in hotels and other commercial property, had purchased both units new in 2016 for $34.4 million, using the limited liability company composed of his initials, BSS Charles St. The recent sale gives him a profit of more than $6 million.

The apartment at 70 Vestry Street — the other top sale at almost $37 million, also offers scenic vistas of the Hudson and cityscape via an 1,892-square-foot terrace and from nearly every room inside.

The unit, 12 North, extends 4,646 square feet and features four bedrooms and five and a half baths, as well as a library that could be converted into another bedroom. A 31-foot living room, anchored by a fireplace, adjoins a formal dining room, and a windowed eat-in kitchen with custom oak paneling connects to a family room.

The primary bedroom suite has two walk-in closets and a spalike bathroom.

The apartment was bought through a revocable trust and sold by the limited liability company NYBB Vestry.

The Hovnanians got $15.9 million for their fully renovated, Italianate-style townhome at 292 West Fourth Street, a tree-lined block between Bank and 11th Streets in the Greenwich Village Historic District. They had purchased the house in 2012 for $7 million.

The red brick building, built in 1860, is five stories high and 20 feet wide, with four bedrooms, four and a half baths and six wood-burning fireplaces. The primary bedroom suite encompasses the third floor and features a large bath and an even larger dressing room. The roomy finished basement has a gym and laundry room.

The home also offers plenty of exterior space, including a landscaped garden in the rear, a terrace off the library and two large rooftop terraces flanking a glass solarium.

Mr. Hovnanian knows a thing or two about construction. He is the chief executive of Hovnanian Enterprises, a home-building company started by his father and uncles and based in Matawan, N.J. Property records list the buyer as AR Ventures Real Estate II LLC.

The adjacent house, No. 294, sold for $7.5 million to Douglas and Barbara Herrington. Though built around the same time and of similar size, listing photos indicate that it could use the same T.L.C. that its neighbor likely needed at one time.

The Nierenbergs paid $14 million for a triplex atop a boutique condominium at 66 East 11th Street. The apartment had been on and off the market since 2014 and listed for as much as $30.5 million. The reality TV star Kim Kardashian West was reportedly among the would-be buyers who had toured the unit.

The penthouse extends 7,693 square feet and has four bedrooms, four full bathrooms and three powder rooms, along with two living areas. The main bedroom suite has an enormous walk-in closet and a separate office.

A 2,300-square-foot landscaped terrace atop the unit has a solarium and areas carved out for dining and lounging. A spiral staircase and an elevator connect all the spaces.

Mr. Nierenberg is the chief executive of the New Residential Investment Corporation, a REIT focused on mortgage assets.

The Rockefeller apartment, which traverses the 15th floor of 812 Fifth Avenue, near 62nd Street, was sold for $9.95 million, below its $11.5 million asking price. The buyer was Ralph Nakash, a founder of Jordache Enterprises, a privately held conglomerate best known for its designer jeans.

The co-op unit, which had been on the market for 43 days, extends around 3,990 square feet and was sold as a “white box,” with an interior ready for refinishing and reconfiguration. There is also a 290-square-foot terrace overlooking Central Park.

The home had been in the Rockefeller family since 1963; it most recently belonged to Nelson A. Rockefeller Jr., one of Mr. Rockefeller’s sons.

Mr. Rockefeller Sr. purchased the apartment new while he was serving as governor. He had occupied three floors at the apex of neighboring 810 Fifth Avenue with his first wife, Mary. And after their divorce, she kept the top two floors and he remained on the lower floor, eventually expanding his apartment into building No. 812. (The co-op unit at No. 810 has long been sold.)

The 16-story building, which fronts Broadway and occupies an entire city block, was erected in 1898 and once served as the headquarters of the New York Life Insurance Company. The City of New York acquired the building in the late 1920s and used it to house courts and government agencies.

The developers, Elad Group and the Peebles Corporation, bought the building in 2013 and converted it into a condominium.

Mr. Davis’s new residence — one of 167 units in the building — comprises 2,448 square feet and has three bedrooms and three and a half baths, along with soaring ceilings.

Mr. Davis, who has a long, storied career in the music industry, has won five Grammy Awards and is a member of the Rock & Roll Hall of Fame as a nonperformer. 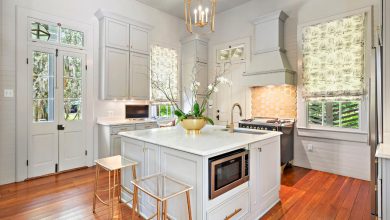 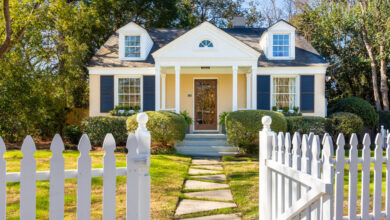 What $650,000 Buys You in South Carolina, Nebraska and New Jersey 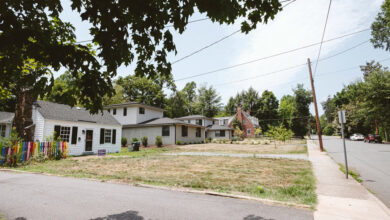 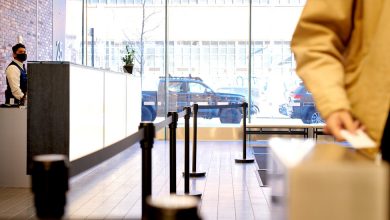 Office Lobbies Are Going Contactless Because of Covid