wo influential conservative think tanks described in detail on Wednesday how legislatures could dismantle the administrative structures that support diversity, equity, and inclusion efforts at public colleges.

Model state legislation, written by scholars at the Manhattan and Goldwater Institutes, if passed, would prohibit colleges from hiring diversity, equity, and inclusion officers; bar trainings that instruct staff to identify and fight against systemic racism; eliminate requirements for employees to commit to diversity statements; and could disallow even institutional commitments to social justice and recommendations that students be addressed by their preferred pronouns.

“This package is meant to reverse illiberal tendencies that have swept across higher education in the past decade,” said Ilya Shapiro, one of the authors of the model bill and a senior fellow and director of constitutional studies at the Manhattan Institute.

It’s the means of the DEI efforts that are more of a problem than the goals of making campuses more diverse and inclusive, Shapiro wrote in an email. “Should colleges afford equal opportunity? Reach out to underprivileged communities to make sure otherwise qualified students aren’t being overlooked? Make students feel welcome and supported on campus? Of course — all of these are no-brainers,” he wrote.

But institutions should pursue those outcomes, he added, in a way that doesn’t “determine and enforce hierarchies of privilege, compel speech, or extend preferential treatment based on race, gender, sexual orientation, etc.”

DEI officers form a kind of revolutionary vanguard on campuses; their livelihood can only be justified by discovering — i.e., manufacturing — new inequities to be remedied.

In explaining the rationale for the document, Shapiro and his co-authors decry DEI offices as Soviet-style enforcers of left-wing ideology that are wasting tuition money and public tax dollars.

“There is a widespread consensus among conservative academics and higher education experts, as well as many centrist faculty, that university DEI offices are the nerve center of woke ideology on university campuses,” the authors write. “DEI officers form a kind of revolutionary vanguard on campuses; their livelihood can only be justified by discovering — i.e., manufacturing — new inequities to be remedied.”

In addition to prohibiting such administrative units, the proposed legislation would make public colleges that violate its codes subject to lawsuits by individual students, alumni, or faculty. The draft also recommends that money spent on diversity programs be redirected to scholarships for low- and middle-income students at the discretion of a governing board.

The model bill, as written, could have a variety of unintended consequences, said Jeremy C. Young, senior manager for free expression and education at the nonprofit advocacy group PEN America, including diminished efforts to recruit underserved populations as students and faculty members. The bill could also violate free-speech rights by constraining administrators and faculty from even advocating for diversity, equity, and inclusion, and could cause institutions to violate accreditation standards, Young said.

“There’s no way in which it is helpful to have state governments come in and pass something like this,” Young said.

everal colleges in recent years have deployed a litany of efforts to better serve students of color, who today make up the majority of high-school graduates. Colleges have hired DEI officers, reckoned with the ways their institutions in the past banned students of color, and set aside money, programs, and spaces on campus to serve the needs of such students.

The Black Lives Matter movement has created even more momentum. DEI offices are now ubiquitous on the campuses of public and private nonprofit colleges. In addition, improving the outcomes of Black, Hispanic, and Native American students, which often lag behind those of white and Asian students, is one of the top priorities of state higher-education leaders, according to a recent survey from the State Higher Education Executive Officers Association.

But as those efforts have grown, conservative activists and elected officials have pushed back, arguing that such measures may discriminate against white students and violate academic freedom, and that they are part of a liberal effort to indoctrinate students.

Over the past two years, state lawmakers in 15 Republican-controlled states have passed 19 bills that seek to restrict teaching on issues of race, racism, and gender, according to figures from PEN America. Laws in seven states specifically address instruction on those topics at public colleges.

Many of those laws are likely to face legal challenges. In November, a state court judge in Florida suspended parts of the so-called Stop WOKE Act championed by Gov. Ron DeSantis, who has made it a mission to snuff out diversity, equity, and inclusion proposals at public colleges.

There are also efforts afoot by college leaders to root out color-conscious programs from their campuses. On Wednesday, the Florida College System released a statement, attributed to the presidents of its member institutions, that they would identify and eliminate any academic requirement or program “that compels belief in critical race theory or related concepts such as intersectionality.”

“We must ensure that our institutions of higher learning are focused on academic excellence and the pursuit of truth, not the imposition of trendy ideology,” DeSantis said during his inaugural speech for a second term. A possible presidential contender in 2024, DeSantis has also asked all the state’s public colleges and universities to provide details on spending for diversity, equity, and inclusion programs. A Chronicle analysis found that among the state’s public universities, none spent more than 1 percent of their budget on such measures.

The governor has also appointed a bevy of well-known conservatives to the Board of Trustees of New College, the state’s public liberal-arts institution. One of those appointees is Christopher F. Rufo, a senior fellow at the Manhattan Institute and director of the initiative on critical race theory, who has pledged to remake the college into a haven for conservative thought and instruction.

Rufo is also among the authors of the model legislation to ban DEI offices at public colleges.

“Left-wing radicals have spent the past fifty years on a ‘long march through the institutions,’” Rufo tweeted following his appointment. “We are going to reverse that process, starting now.”

Shapiro, another author of the bill, said his own experience of being investigated by the Office of Institutional Diversity, Equity, and Affirmative Action at Georgetown University informed his thinking on the model bill. Last year he was named executive director of the Center for the Constitution at Georgetown’s law school. Before he began his duties, his job was put on hold after he criticized the nomination of Ketanji Brown Jackson to the U.S. Supreme Court in a way that some, including the dean of the law school, considered “appalling.” After a four-month inquiry, Georgetown reinstated Shapiro, but he resigned immediately.

“That lived experience certainly opened my eyes to these issues,” Shapiro said during an interview. “If I were at Georgetown, I wouldn’t be rolling out model legislation.”

he model legislation by Rufo, Shapiro, and Matt Beienburg, director of education policy at the Goldwater Institute, is a 13-page memorandum, including a baker’s dozen of endnotes, that lays out the legal mechanisms for abolishing DEI offices as well as the rationale for the proposal.

“Although DEI sounds innocuous and even salutary, it’s an Orwellian phrase that in reality prevents intellectual diversity, impedes equal opportunity, and excludes those who don’t conform to progressive orthodoxy,” the authors write.

The bill defines DEI offices as any administrative effort meant to “manipulate or otherwise influence the composition of the faculty or student body with reference to race, sex, color, or ethnicity.” The bill carves out numerous exceptions for lawyers who ensure compliance with the requirements of federal law, such as Title IX, which prohibits discrimination based on sex, and Title VI, which bars discrimination on the basis of race, color, or national origin. Other exceptions include academic programs, courses or research, and the activities of student groups.

Mandatory diversity training prohibited under the model bill includes any requirement for a student, faculty member, or job applicant“purporting to describe or expose structures, systems, or relations of power, privilege.” Such requirements could include not only traditional trainings and workshops, but also participation in “ any administrative process or decision-making body,” the proposed bill states.

“Even when DEI officials claim their training is ‘voluntary,’ it is often in fact required for faculty who wish to perform the most basic roles on campus,” the proposed bill states. “At most leading public universities, DEI training is mandatory for faculty who wish to serve on any hiring committee, which is a function nearly all faculty perform.”

The bill also argues that diversity statements , which are becoming more common in the hiring and promotion processes at colleges, should be outlawed because they function as a kind of loyalty oath or litmus test for employment.

Under the bill, colleges would not be able to require job applicants to share their “views on, experience with, or contributions to diversity, equity, and/or inclusion; marginalized groups; anti-racism; social justice; intersectionality; confessing one’s race-based privilege; or related concepts.”

Other states are already considering similar measures. A bill introduced in Texas late last year would prohibit “any office that funds, promotes, sponsors, or supports an initiative or formulation of diversity, equity, and inclusion beyond” federal nondiscrimination requirements.

The Board of Governors for the University of North Carolina system is considering a policy that could bar the use of diversity statements in hiring by prohibiting any requirement for employees or applicants to “affirmatively ascribe to or opine about beliefs, affiliations, ideals, or principles regarding matters of contemporary political debate or social action.”

Such efforts still face numerous hurdles and are likely be challenged in court.

Joseph Cohn, legislative and policy director at the Foundation for Individual Rights and Expression, said his organization shares some of the same concerns about diversity statements and other measures colleges use to create a diverse and inclusive campus. In some cases, colleges may be trampling the First Amendment rights of faculty, FIRE argues, by requiring them to “demonstrate their commitment to ‘diversity, equity, and inclusion.’”

But the model bill and other measures must strike a difficult balance, Cohn said, between prohibiting diversity statements but also not barring employees or students from sharing opinions that support diversity, equity, and inclusion.

The Texas bill, for example, strays into areas that would be unconstitutional, FIRE said, because it would require a “policy that prohibits students from ‘endorsement or dissuasion’ of a particular religion, lifestyle, or culture.”

Paulette Granberry Russell, president of the National Association of Diversity Officers in Higher Education, said campus officials should fear the proposed bill because it would silence essential conversations on the continued impacts of racism.

“Everyone in higher education needs to be alert and aware of what’s going on,” she said.

This K-Beauty Spatula is TikTok's Key to Flawless Foundation Application

Texas Christian U. Names New President; U. of Nebraska at Lincoln President to Retire 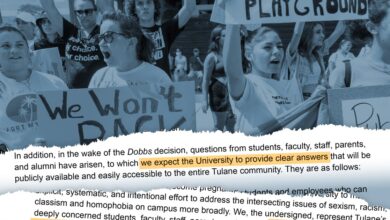 Fielding Questions About Abortion, Colleges Turn to a Familiar Vehicle: the Working Group 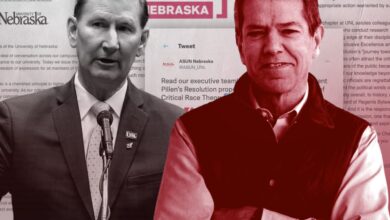 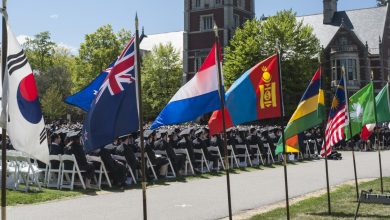 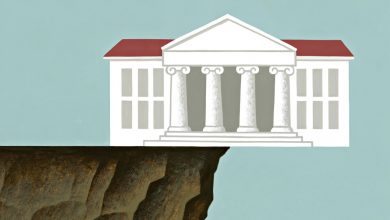 A Bright Spot for Enrollment Is Showing Signs of Strain