A Siberian Husky named Caleb is the star of a new movie called The Year of the Dog about a man struggling with sobriety and his bond with an athletic rescue dog. Following successful test screenings in Montana and Idaho, where it opened ahead of major studio films, The Year of the Dog movie will soon show in more than 100 theaters nationwide in February.

Aside from casting a rescue dog in the film, The Year of the Dog producers have partnered with animal shelters in communities where the movie will be playing and plan to donate a portion of ticket sales to each of those local shelters.

What makes Caleb the rescue dog a hit on screen?

Before landing the role of Yup’ik, Caleb bounced around from shelters to fosters homes, often labeled as too playful and energetic for adoption. It was that spunk that caught the attention of first the California-based Performing Animal Troupe and then producer and actor Rob Grabow and dog trainer Jon Van Dyke, who know that those qualities often make the most memorable dogs on screen.

What dog training was involved?

Jon, who likes to work with a dog for at least six months to build trust, had about six weeks to work with Caleb, a 1-year-old puppy with hardly any training. “He could barely sit when I met him, but he was melt-your-heart cute,” says Jon.

The first few days were focused on relationship building. Jon and Caleb ate, watched movies and played together in order to establish a trusting bond. They worked on basic cues and then moved onto more specific training for scenes.

“All those things that others saw as his imperfections — his high energy, his playfulness, his stubbornness — they are precisely the things that made him able to carry so much of this film,” Rob says.

Caleb lives with his adopted family in California and has been focusing on Petco commercials and TV. There are talks of him landing a role in another film.

Where can readers learn more about The Year of the Dog movie?

Where to Find Affordable Mental Health Therapy in Canada

What Colors Can Dogs See? – Dogster

Help! My Dog is Choking – Dogster 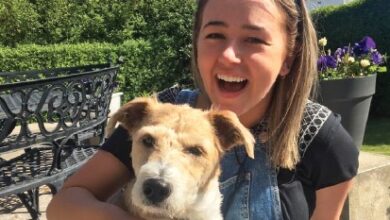