Newlywed Mouni Roy received a wish on her big day from politician and former actress Smriti Irani, with whom she co-starred in iconic TV soap Kyunki Saas Bhi Kabhi Bahu Thi. Mouni married fiancé Suraj Nambiar in Goa this morning. The wedding was attended by actors such as Mandira Bedi and Aashka Goradia and while it’s not clear if Ms Irani was there as well, she did post pictures from the wedding ceremony – one of what appears to be Suraj fixing Mouni’s mangalsutra and another of Mouni as a bride. Smriti Irani and Mouni Roy have known each other for 17 years, the caption explained, and Suraj is “one hell of a lucky man.”

Smriti Irani wrote: “This girl came into my life 17 years ago. They claimed she was a novice then but such was her wisdom that she brought warmth and much joy along with the life lessons she infused amongst those who are lucky to have her as a friend, as family. Today she begins a new journey. May all the Gods be kind and bless her with happiness, prosperity and good health. For the boy… well, you are one hell of a lucky man. God bless Suraj Nambiar, love you Mouni Roy.”

Mouni Roy was cast as Krishna in the last two years of Kyunki Saas Bhi Kabhi Bahu Thi; Krishna was the adoptive daughter of Tulsi Virani, played by Smriti Irani on the soap which ran from 2000 to 2008. Smriti Irani later quit showbiz for politics but remains close friends with Mouni, producer Ekta Kapoor and others from the world she left behind.

Mouni Roy and Suraj Nambiar’s South Indian wedding was preceded by a haldi and mehendi. The festivities were attended by actors Mandira Badi, Aashka Goradia and Arjun Bijlani as well as singer Manmeet Singh of Meet Bros.

Mouni Roy’s TV credits include the hit show Naagin and she will next be seen on the big screen in Brahmastra opposite Ranbir Kapoor, Alia Bhatt and Amitabh Bachchan.

Lata Mangeshkar Taken Off Ventilator As A Trial, Say Family The Humour In Badhaai Do Is Not At The Expense Of LGBTQ+ Community: Bhumi Pednekar 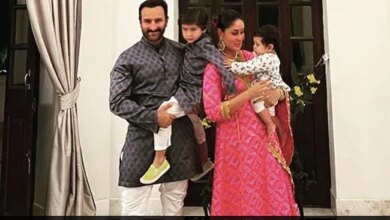 Only This Little Munchkin Can “Distract” Kareena Kapoor From Posing. See Her Pic With Saif Ali Khan And Sons 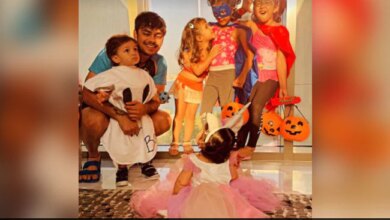