This is not how Moe Harkless expected his first season with the Miami Heat to go.

After signing a one-year, $3.6 million deal to join the Heat in free agency this past offseason, Harkless has played in just nine of the first 26 games because of a combination of injuries and a lack of minutes when he has been available. The 27-year-old forward entered Monday night’s road game against the Los Angeles Clippers with a total of 12 points on 4-of-8 shooting on threes, eight rebounds, five assists, two steals and two blocks in 96 minutes this season.

Harkless was available on Thursday against the Houston Rockets for the first time in nearly three weeks, as he missed nine straight games because of a left thigh contusion. Despite being available, Harkless was not part of the rotation and did not play in Thursday’s win over the Rockets or Saturday’s loss to the Utah Jazz.

But Harkless took a step forward toward a potential return to game action on Sunday in Los Angeles, participating in his first full team practice since sustaining the thigh contusion during a Jan. 23 loss to the Brooklyn Nets.

“It was a very important day for him. He’s feeling better,” Heat coach Erik Spoelstra said. “He has been working on everything he possibly can in terms of conditioning, player development and studying film, but there’s nothing like having a practice.”

As opponents focus on slowing Duncan Robinson, Heat in search of offensive solutions

“Definitely felt good to just be out here and be on the court with the guys,” Harkless said following Sunday’s practice. “I’ve kind of just been doing a bunch of solo stuff where we’ve been rehabbing the thigh. So it felt good to get up and down a little bit.”

Harkless started the regular-season opener alongside center Bam Adebayo in the Heat’s frontcourt, and he has made three starts this season.

But Harkless’ time in the starting lineup didn’t last long, with Miami working through different options in the frontcourt spot next to Adebayo before settling on Kelly Olynyk. The Heat has used the starting frontcourt of Adebayo and Olynyk in 15 of the past 16 games entering Monday’s contest against the Clippers.

Harkless (6-7, 220) fits the 3-and-D mold as a solid three-point shooter and defender with a 7-2 wingspan who recorded 16 multi-steal games and nine multi-block games last season.

Harkless’ best game as a member of the Heat came in a Jan. 18 win over the Detroit Pistons, when he finished with three points, two rebounds, three assists, two steals and one block in a season-high 30 minutes. Pistons forward Jerami Grant shot just 3 of 9 with Harkless defending him in that game, according to NBA tracking stats.

Then Harkless suffered another setback when he hurt his thigh just three games later.

“When I got hurt in the Brooklyn game, I finally felt like I had a little flow going,” Harkless said. “Then I got hurt. It’s life, it happens. It sucks, but there’s nothing I can do about it. So hopefully I can just get back on the court and get into some kind of flow. It has been a weird year. It has kind of been hard to get into some flow anyway. But dealing with injuries and protocols and stuff like that makes it even harder.”

Harkless split last season between the Clippers and New York Knicks. He averaged 5.8 points while shooting 50.2 percent from the field and 34.7 percent on threes, 3.9 rebounds and 1.1 assists.

The Heat’s other free-agent addition from this past offseason, Avery Bradley, has also struggled to remain healthy in his first season with the organization. Bradley has played in just 10 of Miami’s first 26 games, and he’s expected to miss about two to three more weeks of game action because of a strained right calf.

“It has kind of felt like at every point of the season, one of us was at home while one of us was with the team because of injuries or something,” Harkless said when asked about Bradley. “So we always hit each other [on the phone] every now and then. But he’s a mentally strong guy and I know he’s going to get through his injury and come back better. I’d like to think I’m mentally tough too, so I’m excited to finally get back out there hopefully.”

The Heat had a surprise guest at Sunday’s practice: center Meyers Leonard.

Leonard, who is in Los Angeles rehabbing from season-ending surgery on his left shoulder, made an appearance at Sunday’s practice in advance of the Heat’s matchup against the Clippers on Monday night at Staples Center.

Want to stay up-to-date on the Miami Heat? Get the latest news, game results, analysis and insider information in your inbox from Monday through Friday during the NBA season.

“Immediately, our gym was louder,” Spoelstra said. “The main thing is spirits were great and it’s just good to have him back. I know it feels good for him, too.”

Leonard underwent successful surgery on his injured shoulder on Feb. 2. He suffered the injury in the Heat’s Jan. 9 road win over the Washington Wizards.

“He’s great energy, always positive and always looking to breathe life into other people,” Heat forward Duncan Robinson said of having Leonard at Sunday’s practice. “So certainly nice to have him around and he has definitely been missed here these past couple of weeks.”

The Heat applied for a $4.7 million disabled player exception, with Leonard expected to be sidelined for the remainder of the season. But as of this past weekend, the team was still waiting to be formally granted the exception by the league.

But in order to use the exception, the Heat would have to trade or release a player to open a roster spot. Miami currently has the league-maximum of 15 players signed to standard deals on its roster.

Meanwhile, the Clippers could be without their best two players. Paul George (bone edema right toe) and Kawhi Leonard (left lower leg contusion) did not play in Sunday’s win over the Cavaliers, and their status for Monday’s game against the Heat is still unknown.

Disability groups plead for COVID-19 vaccine: 'I put my life on hold' 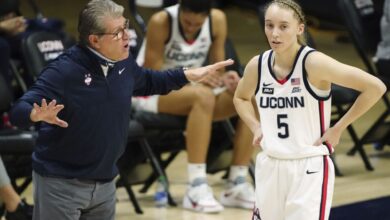 UConn’s Bueckers is Big East player, freshman of the year

NFA girls moved up to No. 1 in state basketball poll