Ford Motor has frozen all projects it was working on with Mahindra & Mahindra while it finalises a new India strategy, three people familiar with the U.S. carmaker’s plans told Reuters, weeks after the two companies called off their planned joint venture. “The options could include working out a new relationship with Mahindra or ending the relationship and related vehicles completely,” one of the sources said. The two other sources said they expect Ford to make a decision in about a month on whether to proceed with Mahindra in a different form or not, adding Ford Chief Executive Jim Farley wants to see a path to greater profitability in India.

Ford and Mahindra had proposed a joint venture to develop at least three sport-utility vehicles (SUVs) for India and emerging markets, as well as share suppliers, powertrains and technology. The $275 million deal, which would have ended most of Ford’s independent operations in India, was called off on Dec. 31.

Since Farley became CEO in October, Ford has pushed harder to remake itself globally as part of an $11 billion restructuring, including ending manufacturing in Brazil, and speeding up the rollout of electric vehicles. With so much on Farley’s plate and limited financial resources, India is a lower priority, the first source said. Dearborn, Michigan-based Ford entered India 25 years ago, but it has just 3% share in a market dominated by Suzuki Motor Corp’s and Hyundai Motor’s extensive line-up of mainly low-cost cars.

The tie-up with Mahindra would have given Ford a better chance against rivals by allowing it to launch new vehicles faster, at reduced costs and with lower investment, company officials and analysts previously said.

Ford said its independent Indian operations will continue. “We are reviewing our businesses strategy, making choices and allocating capital consistent with the plan to achieve an 8% company adjusted EBIT margin and generate consistently strong cash flow,” spokesman Kapil Sharma said. “We will have more details to share at a later date.” 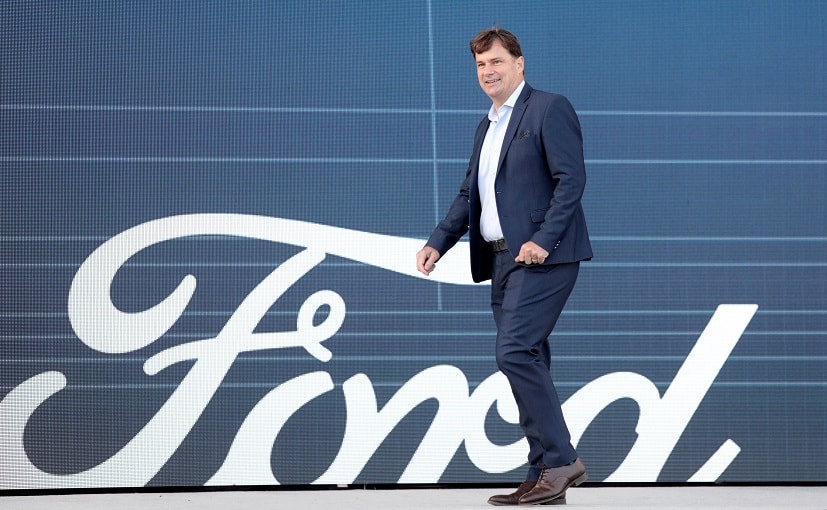 For Mahindra it would have been an opportunity to enter new global markets, but it walked away from the deal over concerns its return on investment would be too low. Mahindra said in a statement that the automakers are looking at ways to collaborate. “We have defined a timeline till the end of March for this work to be completed,” the company said.

Also Read: Mahindra And Ford Likely To Continue Collaboration In Other Fields

Ford is weighing all programmes it had planned for the joint venture with Mahindra and will review which ones it plans to keep from a profit standpoint, the second source said.

The most crucial was a mid-sized SUV to be built by Mahindra on its vehicle platform and using its powertrain. Ford planned to launch this in 2022 with a target to sell around 50,000 units annually in India, two sources said. Mahindra, too, has asked suppliers to freeze work on this, they said.

Ford is also negotiating new terms, including costs, for an engine Mahindra was to supply for its EcoSport SUV later this year, one of the people said.

For two other SUVs that Ford is building for launch in 2023 and 2024, the plan had been to use Mahindra engines. If it walks away from that deal, Ford will need to find another supplier or invest in upgrading its own engines, two sources said.

It will come down to a cost versus profit analysis and that “hinges on discussions with Mahindra,” one of the sources said.

Ford India reported pre-tax profits over the last three years, its biggest hurdle in India is low plant utilisation of around 53% over a five-year average

At a town hall earlier this month, Dianne Craig, president of international operations, said Ford was exploring all options when asked about the company’s plans following the end of the Mahindra relationship.

Ford’s average sales in India have languished at around 90,000 units a year prior to the economic slowdown in 2019 and the pandemic in 2020. But exports are nearly double what it sells in the domestic market and that helps it make money.

While Ford India reported pre-tax profits over the last three years, its biggest hurdle in India is low plant utilisation of around 53% over a five-year average.

Even as it thinks about bringing global products to India – its Territory SUV in China is an option – Ford will need to look at several factors including competition, new fuel efficiency rules and its ability to make money in a price-sensitive market to ensure success.

India’s competitiveness as an export base for affordable cars will also play a role, two sources said.

“If Ford decides to invest more in India it needs to know by when it can recover that investment,” one source said.

Japanese Student Forced to Dye Her Hair Black Wins, and Loses, in Court