Informed political dramas are a rarity in Hindi cinema. When a film titled Madam Chief Minister comes along, one can, therefore, barely contain one’s excitement. You expect a cinematic work that tackles both politics and gender and provides intelligent insights into the two themes. But this new theatrical release written and directed by Subhash Kapoor (Phas Gaye Re Obama, Jolly LLB) and starring Richa Chadha in the lead role, is a disaster. It is worse than bland. It is bunk.

Madam Chief Minister is a jumble of pedestrian notions that add up to nothing noteworthy. It touches upon caste and gender issues not only half-heartedly but also with the aid of yawn-inducing cliches. It is primarily a story that rides on people jousting in unseemly and bizarre ways for political power. The principal character’s social identity nor her gender comes into play in any significant way when the lady assumes the highest office in India’s largest state and has to pull out the stops to keep her rivals at bay.

Madam Chief Minister opens somewhere in Uttar Pradesh in the early 1980s where on the very day that a Dalit man’s wedding procession is violently prevented from passing through an upper caste locality, a girl in another Dalit home escapes female infanticide. The film jumps forward to the present.

The heroine Tara – she is obviously the girl who might not have lived beyond the day of her birth in 1982 – is now an assistant librarian in a boys’ college. A few boys barge into the library and ask for a copy of the Kamasutra. Tara gives them a piece of her mind. They beat a hasty retreat. Moments later, a student leader Indramani Tripathi (Akshay Oberoi) arrives in the reading hall with his slogan-shouting supporters. She is firm again: you are not permitted to shout slogans here, she tells them. Give us permission, the college union election candidate retorts.

Turns out that Tara is in a relationship with Indramani Tripathi. She is pregnant for the second time. The first time around, she had gone in for an abortion. Not again, she asserts when the upper caste boy refuses to marry her. She puts her foot down and declares that she will not terminate the pregnancy come what may. The lover, worried about his political future, unleashes his goons on her.

Saved in the nick of time by a veteran political leader, Master Suraj Bhan (Saurabh Shukla), she becomes a part of the inner coterie of his party, which works for the uplift of the backward castes. She quickly becomes the old man’s trusted factotum.

The beginning of her political ascent is only a step away from here. The leader of a rival political party, Arvind Singh (Subhrajyoti Barat), comes up with an offer for a tie-up with Suraj Bhan’s organization for the upcoming state elections. Having seen the spark in Tara, Suraj Bhan sends her to negotiate the seat-sharing deal with Arvind Singh. Soon enough, she becomes the party’s candidate from the sitting chief minister’s constituency.

A tough young woman in a political formation dominated by male geriatrics, Tara registers her presence in no uncertain manner. She is picked ahead a senior party leader to be the chief minister when the alliance wins the election comfortably.

Until this point, the yarn that Madam Chief Minister spins is passable, perhaps even believable. But once the internecine rivalries come to the fore and the politicians begin to behave like errant school kids, the screenplay ties itself up in silly knots. Who would buy the idea that a senior leader would land up in a hotel where his MLAs are being forcibly held and have his gunmen open indiscriminate fire at security personnel stationed there to protect the chief minister?

Tara has to reckon with attacks from both Arvind Singh and Indramani Tripathi, the boy who betrayed her in the opening moments of the film. It is time for vengeance. Her confrontation with her foes assumes the form of grotesque mini skirmishes and never develops into a full-blown smackdown.

She isn’t alone in the fight that she wages to save her throne. Suraj Bhan is around as a sage adviser, while her quick-on-the-draw brother Babloo (Nikhil Vijay) and crafty Officer on Special Duty (OSD) Danish Rehman Khan (Manav Kaul) always have her back. But it soon turns into a free for all as the key players up the ante. Neither the caste angle and the question of gender seem to matter anymore as Tara faces the ire of her political opponents.

Richa Chada is given far too much to carry on her shoulders. She wilts. The film suffers as a result. If Madam Chief Minister is the mishmash it is, the lead actress isn’t to blame. The screenplay is rudderless. Even quality actors like Saurabh Shukla and Manav Kaul (both of whom are as steady as always) are unable to pull the film out of the mire. Not their fault at all!

Any drama hinging on a political clash needs a strongly written antagonist. Neither Akshay Oberoi nor Subhrajyoti Barat’s characters are fleshed out sufficiently. They come and go without making any real impact on the course of the film, which is a pity because both Oberoi and Barat are actors capable of raising their game when they are allowed the space they deserve.

Isn’t there any takeaway at all from this film? Well, at a stretch, there is at least one line that one might want to mull over. A politician in Madam Chief Minister tells another: “Yeh woh pradesh hai jahan jo Metro banata hai woh haar jaata hai aur jo mandir banata hai woh jeet jaata hai” (This is a state where one who builds the Metro loses and the one constructs a temple wins). Bang on!

Tara, on her part, opens her speeches with “Kaisi lag rahi hoon (How am I looking)?” She herself answers the question in the form of another question delivered with rhetorical force: “Ekdum patakha?” Wish we could agree with her. Neither she nor the film bears any resemblance whatsoever to a firecracker. Madam Chief Minister is a misfire that makes a great deal of noise without making much sense. In that sense, it is like many of our politicians. Madhavan Tried To Make Pizza At Home From Scratch. The Result 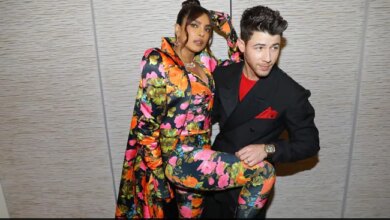 Priyanka Chopra Is Always “The Star Of The Show.” See Her And Nick Jonas Being Adorable At British Fashion Awards Pics From Ram Kapoor And Gautami’s Vacation In “Paradise”