ANN ARBOR, Mich. (AP) — Diamond Miller scored eight of her 17 points in the first quarter to help No. 8 Maryland start strong and Ashley Owusu had 22 points in an 88-63 victory over No. 12 Michigan that clinched a share of the Big Ten title on Thursday.

The Terrapins (20-2, 16-1 Big Ten) can win the conference championship outright by ending the regular season with a win against Penn State (9-13, 6-12) at home on Saturday. Since joining the conference, Maryland has at least shared the Big Ten title in six of seven seasons.

With a trapping press and an active zone defense, the Terrapins held Hillmon to two points in the pivotal first quarter as they built a 27-13 lead.

Maryland didn’t have any trouble keeping a comfortable cushion, leading by as many as 29 points early in the fourth quarter.

Maryland: Coach Brenda Frese’s 19th team at the school has won nine consecutive games, peaking at the right time. If the Terrapins can win the Big Ten Tournament next week, they will improve their chances of getting a No. 1 seed in the NCAA Tournament and their shot at winning a national title for the first time since 2006.

Michigan: Hillmon scored her first points after the Wolverines were already trailing 23-6 and didn’t score again in the opening quarter. The star forward finished with a solid scoring total, but her team will have a hard time beating elite teams if she starts to slow offensively.

Maryland: Senior Day is set up well for a celebration, with a home game against the 11th-place Nittany Lions on Saturday, when the Terrapins can earn an outright Big Ten title.

Michigan: Hosts Northwestern in a matchup of teams hoping to improve their seeding for the Big Ten Tournament. 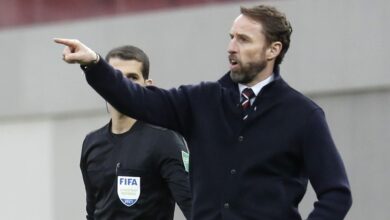 Gareth Southgate ‘pushing for a bit more’ from England 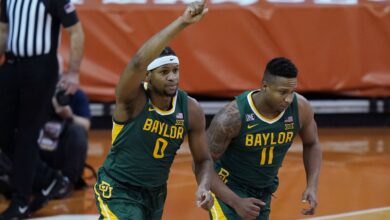 Blue bloods are way down