No matter where you live, you almost certainly have had the experience of being out on the stoop or porch late at night and hearing the unmistakable sound of dogs howling in the distance. So, why do dogs howl?

Researchers believe that dog howling is bound up in dog genetics. The ancient dog breeds are recognized for how closely their DNA matches that of the wolves from which they descended. When answering the question, “Why do dogs howl,” we have to examine the following questions, too — Is dog howling an atavistic expression of a shared wild ancestry? A lingering vestige of wolf times and pack activity? Communication seems to be at the heart of things, so let’s seek to answer the query, “Why do dogs howl” — and find out what they might be saying.

1. Dog howling is a community organizing and homing beacon

In the wild, wolves and feral dogs howl to bring scouts back to the pack after a hunt. Dogs who remain behind howl to provide the location of their base. Dog howling acts as a vocal homing beacon or a kind of auditory lighthouse that guides other pack members back.

Pet dog howling can be a similar expression, particularly if you’ve been out of the house all day. Dogs howl to beckon their loved ones back home.

Howling signals to other dogs that the area they are entering has been claimed and occupied. It is a warning to outsiders that encroachment risks the threat of violence. Howling dogs announce their presence and alert their community to changing circumstances. In this context, dog howling functions as a defense mechanism, warding off potential predators and ensuring the safety of the dogs in the pack.

In a domestic setting, some dogs bark, others howl when a stranger comes to the door or a new car pulls up in the driveway.

A howling dog may simply want attention. Some dog owners know that dogs can be as emotionally manipulative as any human. The sound of a dog howling attracts the attention of his owner. Maybe you dash across the house to see what’s wrong, only to find yourself greeted by a dog who wants to be played with. Go through this routine enough times and the dog will learn that howling is an effective way to bring you running.

Of course, there are two sides to this coin. If your dog knows that you leave for extended periods of time, he may howl as an expression of separation anxiety. Dogs that don’t have toys or sufficient things to entertain them in your absence get sad, lonely and depressed. So, the sad answer to, “Why do dogs howl?” could be that your dog is howling in protest of being left alone. Imagine if someone put you in a crate all day or left you in some other space for an extended period of time. You’d howl, too!

4. Dogs howl in response to stimuli and bonding exercises

Dog howling can be a response to environmental triggers. Common provocations include ambulance, police or fire-engine sirens. The sound of these noises were the only times that my dog ever howled. The distant sound of approaching sirens always prompted her to sit up and join in the wailing. The reason remains uncertain, since she never howled at the sound of other dogs howling. Perhaps the pitch of sirens awoke some otherwise-dormant genetic memory.

Much of our research confirms that dog howling occurs when certain sounds are perceived. The prompts and triggers can be anything: music on a stereo at a party, popular television theme songs, or the sound of musical instruments. People who enjoy dogs howling even seem to encourage their dogs by howling themselves! It would seem that one reason dogs howl is the experience of community or of bonding. Why do dogs howl at sirens? Why do dogs howl when you howl? Perhaps it’s to join in and be a part of the action.

5. Dogs howl to alert you to injury or discovery

Another answer to, “Why do dogs howl?” could be that dogs howl to express injury. People weep when they get hurt; dogs howl in similar situations. Dogs howl to vocalize pain. Some dogs are also trained to howl when they make discoveries. Hunting dog breeds howl to signal the pursuit or apprehension of prey. If a dog has treed, cornered or caught something, he may howl to alert his owners to the location of the prize.

Some final thoughts on the question, “Why do dogs howl?”

One thing to consider is that dog howling, like any other form of vocal expression, has no fixed meaning. The answer to, “Why do dogs howl?” is a shifting signifier whose interpretation is situation-dependent. I enjoy going to karaoke; is it so difficult to imagine that a dog might not howl out of necessity, but out of joy?

Tell us: Is your dog a howler? When and how do your dogs get the urge to sing? Why do you think your dogs howl? Share your experiences with dog howling in the comments! Let us know the breed or mix, if you can.

This piece was originally published in 2015.

Learn more about dog howling and barking with Dogster.com: 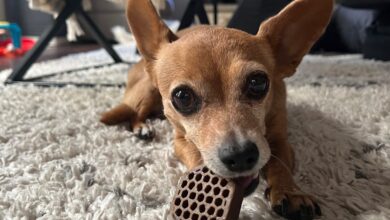 Help! My Dog Has Parvo – Dogster