WASHINGTON — The Biden administration will restore diplomatic relations with the Palestinian Authority, more than two years after President Donald J. Trump effectively ended them. The action signals a return to a more traditional and evenhanded approach to the Israeli-Palestinian conflict after a Trump administration policy that was heavily slanted toward Israel.

The shift, which will include a resumption of American aid to the Palestinians, was announced on Tuesday in a speech by Richard Mills, the acting United States ambassador to the United Nations.

Mr. Mills also reaffirmed support for a “mutually agreed, two-state solution” between Israel and the Palestinians, “in which Israel lives in peace and security, alongside a viable Palestinian state.” And he called on the parties to refrain from unilateral actions, such as the annexation of territory and settlement activity by Israel, or incitements to violence by the Palestinians, that could make such an outcome more difficult.

Analysts and regional leaders say the prospects of an Israeli-Palestinian peace agreement are dimmer than they have been in decades. The parties have all but ceased communications, Palestinian leaders summarily rejected a peace plan offered by the Trump White House last year, and the issue is not among Mr. Biden’s top foreign policy priorities.

But the announcement is part of a broader return to previous United States foreign policy practices under Mr. Biden, and an end to the open hostility between Washington and the Palestinians fomented by the Trump administration. Guided by his son-in-law, Jared Kushner, Mr. Trump took an openly punitive approach toward the Palestinians with the goal of forcing them to make concessions to Israel, to little avail.

The policy shift was quickly cheered by Palestinian leaders and supporters of a negotiated solution between Israel and the Palestinians.

“This is exactly the type of swift action the administration needs to take to restore American credibility as a diplomatic mediator between Israelis and Palestinians,” said Jeremy Ben-Ami, the president of J Street, a liberal advocacy group that supports an Israeli settlement with the Palestinians. “Undoing the terrible damage done by the Trump administration starts with re-establishing a working relationship with the Palestinian leadership and people.”

Mr. Mills said the Biden administration would “take steps to reopen diplomatic missions that were closed by the last U.S. administration,” without offering specifics. In addition to closing the Palestinian Mission in Washington in September 2018, the Trump administration also closed the United States Consulate in East Jerusalem.

Mr. Biden has no straightforward way of reopening a Palestinian Mission in Washington. A law passed by Congress in 1987 blocked the Palestinians’ right to open an office in America. Successive presidents were able to bypass the legislation with a waiver, but subsequent laws passed in 2015 and 2018 limit the president’s ability to circumvent the earlier restriction.

The announcement was nevertheless greeted warmly by Palestinian officials, who see the tone of the Biden administration as a welcome respite from the cold shoulder offered by Mr. Trump.

“For the first time, President Biden’s administration has officially expressed its position toward the peace process and the two-state solution,” Ahmed Majdalani, a member of the Palestine Liberation Organization’s executive committee and minister of social development at the Palestinian Authority, said in response to the announcement. “We believe that this position constitutes an important positive step on the road to restoring U.S.-Palestinian bilateral relations and opens the door wide to restore the peace process within the framework of multilateral international sponsorship.”

In 2018 the Trump administration cut off $200 million in economic assistance to the Palestinians and halted roughly $350 million in annual funding for a United Nations agency that assists Palestinian refugees.

At the same time, Mr. Trump ended Washington’s opposition to Israeli settlements in the West Bank, though he did not support Prime Minister Benjamin Netanyahu’s talk of territorial annexation.

As an alternative, the Trump administration brokered diplomatic agreements between Israel and some of its Arab neighbors, in return for assurance from Mr. Netanyahu that he would not pursue annexation for now, although he has not abandoned the idea. The Israeli leader is now facing a national election for the fourth time in two years after Israel’s coalition government failed to hold together.

In his remarks to the United Nations Security Council, Mr. Mills said that the Biden administration “welcomes the recent normalization agreements” between Israel and Arab states, including the United Arab Emirates, Bahrain, Morocco and Sudan. But he added that “Arab-Israeli normalization is not a substitute for Israeli-Palestinian peace.”

He added that “the U.S. will maintain its steadfast support for Israel” and “will continue its longstanding policy of opposing one-sided resolutions and other actions in international bodies that unfairly single out Israel.” While the Democratic Party has grown more critical of Israeli policies in recent years, Mr. Biden’s positions are more centrist and he is less quick to criticize the country than other Democrats.

This month, the president of the Palestinian Authority, Mahmoud Abbas, announced a schedule for what would be the first Palestinian elections in at least 15 years, in a move that was perceived in part as an attempt to curry favor with Mr. Biden.

Mr. Mills is the U.S. chargé d’affaires to the United Nations. Mr. Biden has nominated Linda Thomas-Greenfield, a career State Department official, to serve as his permanent ambassador to the body. 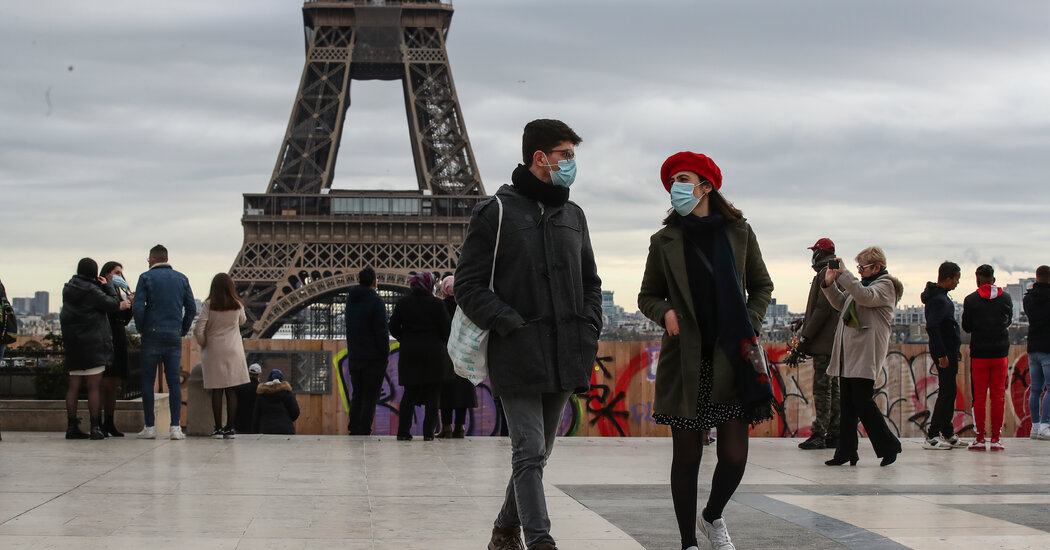 France closes its borders to all countries outside the E.U. as cases rise.

There will be enough Covid vaccines for the ‘entire U.S. adult population by June,’ Johnson & Johnson board member says