I had planned on covering just 8-10 players in this article but found too many sleeper bats and value picks when comparing my personal projections with Yahoo! ADP.

I’m going to change my style for one article and cover more players with shorter descriptions. If you like the format change, please feel free to let me on Twitter @FredZinkieMLB.

Kiner-Falefa having catcher eligibility in Yahoo! formats is an absolute game-changer. He belongs in the late rounds of leagues where he is eligible only at 3B/SS, but he should be a top-5 catcher in roto formats. He will have more plate appearances than nearly every other catcher-eligible player, and his 10-15 steals from a catcher is a huge bonus.

Kirk is not guaranteed a spot on the Blue Jays roster, but the guess here is that he makes the team and immediately starts making offensive contributions. He dropped some unnecessary weight in the offseason and has arguably the best batting eye (career .418 OBP in the Minors) of any catching prospect.

The No. 3 overall pick of the 2019 draft, Vaughn is being considered for the DH spot despite having played just 55 Minor League games. The White Sox believe his plate skills are ready for Major League pitching, and I’m not going to disagree with them when they know promoting Vaughn early will cost them more money down the road. A smart shallow-league plan is to draft Vaughn in the final round, knowing that you’ll cut him if he doesn’t make the team.

Dozier is one of many players in this article who experienced the COVID-19 virus during the 2020 season. The slugger wasn’t terrible last year (.736 OPS), but the guess here is that a return to full health brings his bat back to the form that produced 26 homers, 84 RBIs, and an impressive .870 OPS in ’19.

Nunez joined the Tigers on a Minor League contract but seems like a shoo-in to serve as the team’s starting first baseman. He should also hit in the heart of the lineup, after compiling 43 homers, 121 RBIs, and 101 runs scored across 203 games across 2019-20.

The story on Escobar is pretty simple — he let his fitness slide during the COVID-19 shutdown, and he struggled mightily (.605 OPS) while carrying extra weight during the season. The veteran is ready to make amends this year, and he is just one season removed from producing 35 homers and 118 RBIs in 2019.

The Astros are clearly content with Straw as their starting center fielder, as the club passed on multiple veteran free agents during the offseason. And there are have been rumblings of late that the speedster (170 career steals in 469 Minor League games) might serve as Houston’s leadoff hitter. Old-school manager Dusty Baker might give fantasy managers a 30-steal, 90-run gift by putting the fleet-footed Straw atop his talented lineup.

An offseason trade to Oakland put Andrus on this list, as he gets a fresh start and a full-time role. The native Venezuelan was awful last year (.582 OPS), but he produced 12 homers, 81 runs scored and a .275 average while ranking sixth in the Majors with 31 steals in 2019.

Kelenic became famous to more than just prospect gurus when former Mariners president Kevin Mather publicly disclosed that the team will manipulate the 21-year-old’s service time by having him start the season in the Minors. Kelenic is ready for the Majors now (23 HR, 20 SB, .291 BA in 117 career Minor League games) and will be helping fantasy teams by the last week of April.

Calhoun ranks 13th in the Majors with 49 homers since the outset of 2019, and anyone with his power skills belongs on every fantasy roster. Returning from March knee surgery, the veteran is the perfect late-round pick to immediately move to an IL slot and open up an extra roster spot.

Haniger hasn’t played since June 6, 2019, due to a ruptured testicle and subsequent core muscle surgery. But the outfielder was off to a powerful start that season (15 homers in 246 at-bats) and owns an impressive career .827 OPS. Now healthy, the 30-year-old should get his career back on track.

Tapia should hit leadoff for the Rockies, which is all fantasy managers need to know when evaluating his late-round value. The speedster has a career .285 average and should be good for 15-20 steals. You know the drill: Draft Tapia in daily transaction leagues, with a plan of starting him at home and benching him on the road.

Can you tell that I gravitate towards balanced contributors?! One of many power-speed threats in this article, Senzel produced 12 homers and 14 steals across 104 games in 2019 before being felled by an unconfirmed case of COVID-19 last season. The 25-year-old has a lengthy injury history but also has 20-20 upside, making him a great boom-or-bust pick at the end of drafts.

Best Places to Stay in Santorini

Best Routes & Parks to Walk in Athens during Covid

A tackle at No. 6? A first-round RB? This draft will tell Dolphins’ philosophy to win. 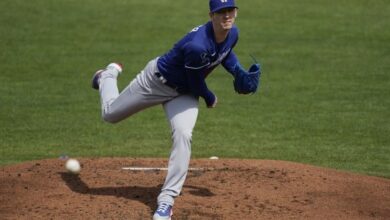 Former Flyer, a father of four, works in investing